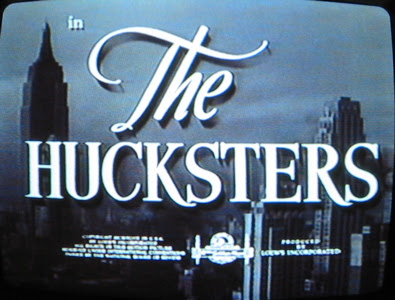 The Hucksters (MGM, Jack Conway) was hardly Clark Gable’s swan song, but it is an interesting star vehicle for an actor who never would command the heights of his 1930s stardom. There’s the melding of prior characters’ into the dashing bachelor ad man, Vic Norman. There’s the collapse of biography and character; Victor has just returned from a stint in the army. Ultimately, the characterization is too confounded for a coherent star image, since Norman swings wildly between cynical ladykiller and sincere Everyman.

Generically, the film seems to be a missing link between the social comedies of Capra and the early 40s (More the Merrier, etc.) and the cynical satirical dramas like Born Yesterday and Sweet Smell of Success. The film sends up the advertising industry, though its harshest fire is reserved for the advertising client (played here with typical flair by Sidney Greenstreet). Thus, unlike films which warn against the distortion of the public sphere (Magic Town, Face in the Crowd), The Hucksters is unclear in its message; it is hard to tell whether it is a warning against mass manipulation of advertising or arguing for the soft sell over the hard sell (as would eventually happen in the advertising field in the 1960s – see Thomas Frank’s Conquest of Cool). 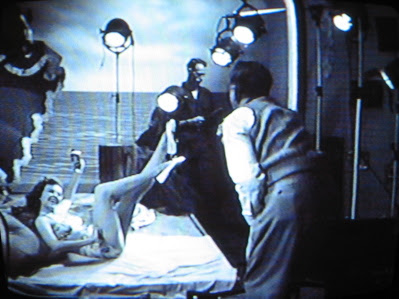 The ad man seemed to be a quintessential figure in the postwar self-imagining. The Hucksters has fun with the class position of the newly visible occupation, using it to bash the unrefined of both the lower and upper classes. Again we see class politics so close to the surface that I keep wondering how much of the class representations are specific to the 1940s and how much was a substratum of Hollywood throughout its studio years.
Labels: 1947 project class comedy star image

Anonymous said…
This comment has been removed by a blog administrator.
12:55 AM