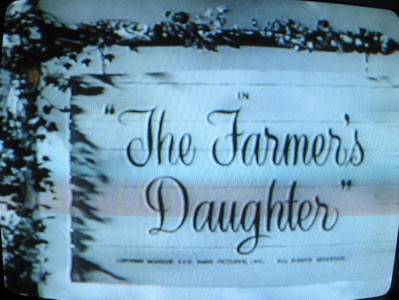 I don’t know how I’ve missed seeing this film before. Given that my book-in-progress on the social problem film places the genre in the political culture of the 1940s, I’m certainly going to need to account for the film’s participation in a postwar liberal consensus. The Farmer’s Daughter (Selznick/RKO, H.C. Potter) is not a straightforward social problem film; it follows in the tradition of Capra and the cycle of social comedies like Devil and Miss Jones. Kathryn Holstad (Loretta Young) is the eponymous farmer’s daughter, a headstrong Swedish-American Midwesterner who comes to the state capital and gets a job as a maid for a congressman (Joseph Cotten) and eventually decides to run for congress herself to oppose the party bosses. Along the way, the film champions a modest welfare state, argues for internationalism, and suggests the fascist threat of the KKK.

The Dore Schary production was low-budget for a Selznick picture but still maintains a prestige picture style with high production values. I’m always interested in the moments of narrational excess that these films sometimes invoke, as in the third shot shown below, from a typical scene. 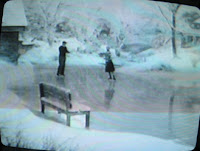 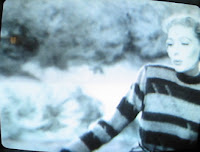 This has to be the first time I’ve noticed a credit for the montage director, Harold Palmer, though this probably says more about my lack of attention during the opening credits than the lack of credit. The montage sequence in the Farmer’s Daughter, however, lacks the playfulness of the Capra films nor the visceral feeling of Don Siegel’s sequences for Casablanca or All the King’s Men.
Labels: 1947 project prestige film social problem film