Brothers and Sisters and Gay Endogamy 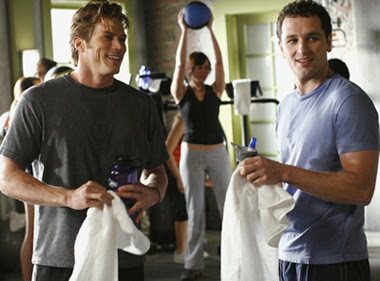 There was a recent episode of Brothers and Sisters in which Kitty sets up her brother Kevin on a blind date with her boyfriend/boss’s brother. Things go horribly wrong: both men resent being set up with someone simply because the other’s gay, and Kevin’s faux-pas cuts any chemistry short. It was the sort of scenario (there are many) that gives the show a reputation of having a “well-rounded” gay character – and, as far as I can tell, a reasonable gay following. Kevin is an openly gay, attractive, and articulate lawyer. And well, if he’s the bit of a gay ubermensch then he’s also not recognizably stereotyped or weirdly celibate.

Yet some deeper change has taken place behind what might be construed as a popular conception of gay images. This show, to my eye, expresses in representational terms the changes of gay life under assimilation. What’s remarkably non-stereotypical about the show is its tendency to treat gay romance on terms similar to straight romance, as a search for a social peer and someone to fit into the extended family. Yet, it’s not the matter of ventriloquism, as Molly Haskell would complain about Tennessee Williams’ female characters; Kevin’s gay specificity is never lost. Endogamous romance works as characterization because a) the American family increasingly includes gays into kinship networks and b) gay men, at least middle bourgeois and petit bourgeois gay men, increasingly conceive of romance as social matchmaking. I don’t have the empirical evidence to suggest that gay endogamy is on the rise (wouldn’t that be a great book!), but anecdotally I’d say that gay subcultures historically have been more exogamous than their straight counterparts and that newer cultural models of gay mating seem to at least posit endogamy as more normative.

To perceive the extent of this shift, consider prior gay representations in which exogamy was the driving emotional and narrative energy: Victim! , Querelle (either Genet or Fassbinder), The Detective, Mala Noche, or from the other direction Andrew Holleran’s novel Dancer from the Dance. Pre-Stonewall, gay desire saw no social bounds (think City and the Pillar); post-Stonewall, cross-class and cross-racial desire dovetailed with the geographic migration gay men made to the urban gay ghetto. Sexual and romantic coupling usually entailed some picaresque venture across class lines, embodied in the physical spaces of the city. At the very least, social desirability of the couple was rarely a condition to be met.

So what I’m hypothesizing is partly an ideological formation – the show’s (gay) writer-producers are invested in presenting a certain image of gayness on the airwaves and I would not be surprised if an assimilationist politics underlay their explicit aims. But it’s also something more specific and concrete in its determination than ideology. Concrete changes in the lived, collective experience of gay people are shifting the representational terms, even unbeknownst to them.

Maybe I exaggerate these shifts, having lived so long in Massachusetts, where gay marriage is both cause and symptom of a real assimilation of gays into the social fabric – concomitantly, gay assimilationism is noticeably very dominant there among gay men and lesbians. There are undoubtedly gay folks across the country not living in a milieu eager to assimilate them; others choose to refuse assimilationist politics. But Brothers and Sisters speaks to the coastal guppie mentality that’s both so explicit and that’s transforming beneath our (and their) eyes.
Labels: gay/lesbian criticism ideology television studies