So far, with the 1947 project, I've just been blogging about the films I am watching for the first time. It occurred to me that for the sake of completism, it might be worth including films I've been familiar with already. What better day to start than Super Tuesday, and what better film than Magic Town (RKO, William Wellman)?

I happen to think this is a gem of a film, less aesthetically (it flaunts neither the literary skills of Apley nor the technical virtuosity of Pink Horse or Paradine Case) than historically. A social comedy about social science, the narrative is about Rip Smith, a pollster who stumbles across a "magic town," a statistical bellweather that perfectly predicts public opinion for the nation as a whole (the kind of claims you occasionally hear about Missouri in national elections these days.) He swoops down on the town, but the town's self-consciousness soon ruins it. The story is part "Man Who Corrupted Hadleysburg," part Middletown - Sarah Igo's recent (and excellent) book on the social scientific consturciton of averageness starts with a discussion of this film, and my own chapter on the public sphere undoubtedly will use it as well. For this film is the start of a series of postwar dramas to make the mass public sphere a social problem for the intelligentsia and a middlebrow audience. (as in Face in the Crowd, as I've noted.)

Though Wellman is the director, it feels like a Frank Capra film. The reason is screenwriter Robert Riskin, Capra's writer, who by the postwar years was as likely to be working independently. Reflecting more on the romantic comedy problem, I'd note that rather than saying that today's Hollywood is doomed and unable to make comedies like it used to, I'd venture that something about the story-by-conference-committee can produce certain kinds of projects better than others. It's not merely the collective nature of screenwriting opposed to a more personal, artistic writerly vision. Importantly, the collective screenwriting process can work well in television, and in fact worked well (on a smaller scale) in Hollywood's studio days. What's different is the lack of a continuous team of talent that develops around either a studio or studio unit. It's something TV shows have in common with the Riskin-Capra team of 1930s Columbia and what separates them from the project-driven comedies like Down with Love or How to Lose a Guy in 10 Days. Speculative admittedly, but it may be a start for explanation. At the very least, Charles Maland's historical scholarship on Columbia (in an essay titled "Necessity and Invention") argues that the consistency of talent was important to the fomulation of Capra's "personal genre."

A genre that, in Magic Town was to take on a particularly postwar public sphere in its purview. 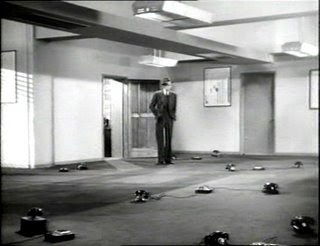 Image capture from Feeling Listless, a blog with a good writeup on the film.
Labels: 1947 project film history public sphere