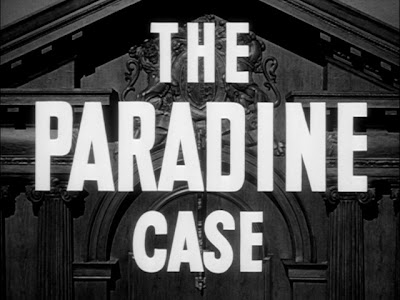 (image: Stephen Hill's movie title page)
Many people have been amused and bemused by the idea of my 1947 project. I think a lot of it stems from the intuitive sense that 1947 is unmemorable as a film history year. A lot of movies were put out, to be sure, but how many made the lists of greats, whether official or unofficial.

Well, Hitchcock's work is no exception: his 1947 entry, The Paradine Case (Selznick for Warners), gets pretty universally panned, ignored, and qualified with "interesting failure" status. And I would be really hard pressed to pick it over faves like Shadow of a Doubt, Notorious, or Strangers on a Train.

But the great thing about watching a bunch of noncanonical works is that you feel free to take them on their own merits. Formally, The Paradine Case may make the case for Hitchcock at his most formalist. There's almost a revelatory glee in his taking everything that the ($2.2M) resources of late 40s Hollywood had to offer and pushing the language of film expressivitiy, even if it never matches the thematic or the affective appeal of the film entirely. At times, it feels cloying, a continuation of the hypertrophies POV shots that Rebecca, Spellbound, and Notorious made famous. At other times, the use of composition, focus and space is breathtaking. The Paradine Case is simply a sustained experiment in the use of compositional depth not to create Wellesian/Wylerian tableaus but to arrest figures in distinct composition planes set in relief against one another. Many have complained about the tedious plotting of the courtroom drama, but it's to the film's credit that the courtroom itself feels like a plastic, cinematic space.

Meanwhile, The Paradine Case interests me historically. Auteur critics point to its failure as an overly thematic film. From my eye, I'm interested in how and why Hitchcock, Selznick, and WB privileged theme over the showmanship usually driving Hollywood projects of this size. Sure, part of the answer is connected to my prestige-film argument. But there's the development of everyday understanding of theme in film that interests me. We take it for granted. And it's not like themes were nowhere to be seen in 1920s and 30s cinema. Hardly. But The Paradine Case seems to strive for the literary field and to take the theatrical ovelap with cinema as theatre proper, with all of the thematic weightiness it could provide.
Labels: 1947 project prestige film

THE PARADINE CASE was indeed produced by Selznick, but it wasn't made for Warners. It was Hitchcock's final film under his contract for the producer, who produced, financed and released the costly flop through his Selznick Releasing Organization. [The film was also shot at Selznick's studio.] Warners may well have released the film in a few international territories at some point, but it isn't a WB picture by any means.
8:53 PM

Thanks for the clarification. I had thought I'd seen a WB branding in the beginning credits, but that may have easily been my mistake (or an international print).
10:52 AM