The Late George Apley (Fox, Joseph Mankiewicz) is the kind of overlooked gem I was hoping to find when embarking on my 1947 viewing. Not that Mankiewicz is an unknown director or that the film was not one of Fox’s more prestige offerings. George Apley, though, has lingered in relative obscurity, without a DVD release. And the advertisement and opening of the film made me fear another sentimental historical drama. 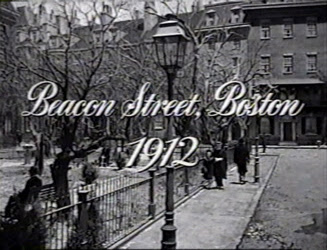 Quickly, it’s apparent that this period tale of a Boston Brahmin family is actually a loving but biting satire of the bluebloods. Maybe it was my years in Boston, but I relished it from start to finish. In any event, the satire gives the film a chance to take the class-sexuality nexus that seems the stock and trade of classic Hollywood melodrama and give them geographic and historical specificity as a moment in the transition to modernity. George Apley (Ronald Colman) is a Brahmin whose children’s love interests threaten to spoil the social arrangement goal of marriage.

The auteurists tend to hate Mankiewicz as symbol of a “sophisticated” director whose cinematic style fails to coalesce into anything significant. I find his fluid camerawork and blocking quite pleasing to watch, and George Apley strikes me as every bit assured and “cinematic” as, say Curtiz’s Life With Father. Take, for instance, this anticipatory track in to create off-screen space in an unexpected manner. 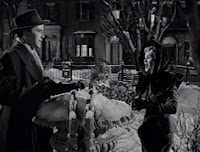 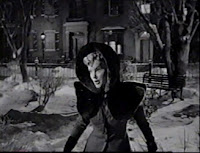 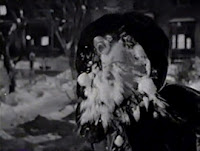 I have just finished an essay (to be part of the social problem film book) on the industrial and social shift in the prestige film from the 30s to the 50s. One project I would pursue further is a closer examination of the 40s prestige style. Once we step away from the evaluative questions that the auteurists have bequeathed us (Is this what cinema should be? How is genre cinema better than ‘serious’ cinema?) we may find a lot to look at. Mankiewicz interests me as a marker in a new kind of narrational voice in commercial cinema. Maybe it was not brand new, but something is different about these postwar prestige styles. Instead of chafing at the subservience of the cinematic to the literary, maybe we can read the “literariness” of prestige cinema in its positivity, for what new it brings to cinematic expression and for the new social functions it implies for a mass art.
Labels: 1947 project film style narration prestige film