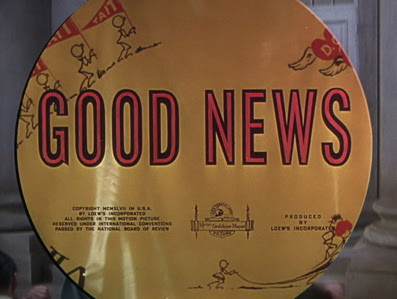 I’m not a connoisseur of musicals, but I’d say that Good News (MGM, Charles Walters) is a good example of a lesser-known (i.e. non-canonical) Freed unit musical. High-key, impeccable Technicolor production values, and complex mise-en-scene are matched to a frumpy-girl-gets-the-football-hero romance. (June Allyson as the frumpy girl, Peter Lawford as the football hero). I'm not sure much decoding is needed to figure out that Good News is about the chanelling of men's libido into socially acceptable women, but this strikes me as a subtext that plenty of contemporary viewers might only half get. (Changed courtship rituals undoubtedly undercut support for the musical as genre.)

I’d always known that the musical privileges long takes, following camerawork, and long shots to allow the virtuosity of the dancers’ bodies to show through. What’s striking about Good News is the maintenance of the longtake even when the actors are not dancing a virtuoso performance. Here's this one-minute take in the library scene: 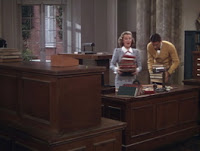 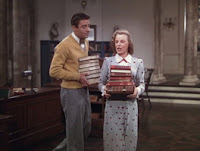 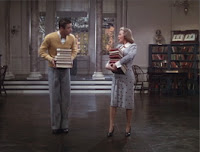 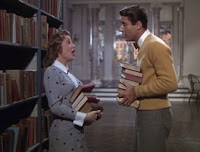 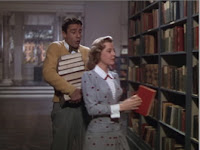 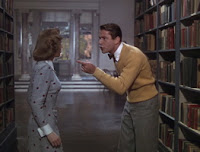 The result is a pursuit of long take aesthetic as a formal device for its own sake. Incidentally, this musical number ends on a violation of the 180 degree rule (with a slight continuity error in actor proximity, no less). Granted this rule might be looser in transitioning between setups, but it’s jarring nonetheless to viewers used to classical Hollywood practice: 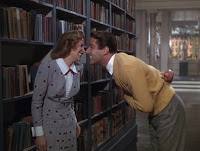 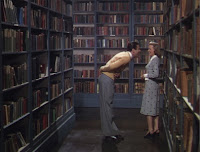 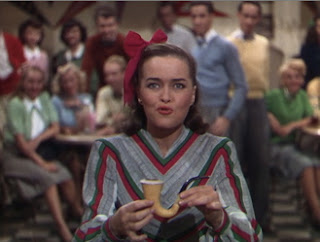 Throughout, the set design and costuming is vibrant, even leading to abstract patterns. 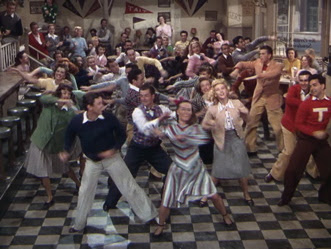 By the way, I tend to resist teaching musicals in a general film studies intro class, worried that camp spectatorship (at best) or historical chauvinism (at worst) will drown out everything else. Is that fear justified?
Labels: 1947 project feminist criticism film style

Diana King said…
Hi Chris,
Thanks for the swanky library stills. I think you're mostly right about musicals. I've seen very few taught in intro classes lately (the exceptions: Singing in the Rain, Meet Me in St. Louis, Dil Se [or other Bollywood films], and Cabaret). And, I think most of those are picked specifically because they deal with some clear sociohistorical event or issue.

There may be newer films that undergrads can latch onto a bit more like Everyone Says I Love You, Dancer in the Dark, Moulin Rouge, Once, or recent adaptations like Rent or Dreamgirls. But, I'm not sure studying these with no sense of what they are drawing from or alternately trying to reject is that great of an idea. The best classes on musicals that I've seen are more specialized survey courses where the entire class is dedicated to watching and historicizing the genre. You're more likely to get students legitimately invested in the topic, and I just think musicals are best understood by looking at more than one.
10:22 AM

The Siren said…
Huh, I never noticed the 180-degree violation in this one, but then again I saw it a long time ago and was not entranced. I have a hard, hard time with June Allyson. And000 the "Varsity Drag" number is the sort of song you can get stuck in your head for weeks at a time and then need some sort of acupuncture or deprivation chamber to remove from your brain cells.

I think modern audiences don't deal well with old movies that are highly stylized, romantic or artificial; at least that has been my unfortunate experience in film theaters. Zach at Elusive Lucidity had a great post a while back that in part focused on why he avoided seeing certain films in theaters, because audience reaction would be too distressing.

All this is a long way to say that you are probably smart to avoid a lot of musicals, at least until the class gets away from the dreary notion that realism is the only style worth anything in film. :)
3:07 PM

DavidEhrenstein said…
Good News is an All-Time Favorite of mine.

Comden and Green ahve said that doing it taughtthem how to structure movie musical, as opposed to the Broadway one where they came from.

While he had been a dance director at Metro for several years, this was Chuck Walters' debut as a feature director. He went on to helm several of MGM's biggest musical hits including Easter parade, High Society and The Unsinkable Molly Brown.

You can see himdancing with Judy in the "Embraceable You" number in Girl Crazy and the Minnelli directed finale of Presenting Lily Mars
9:54 AM