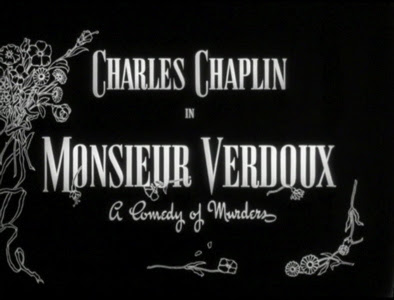 Over the course of this project, I'm likely to include 1947 films I've already seen to give a rounder sense of the year's output. Sad to say that Monsieur Verdoux is not on the "already seen" list, and this is not the only Chaplin film on my list of shame. It's easy to see why the film's flippant treatment of serial murder was a flop - the black comedy frankly seems ahead of its time and in any case is not a tone sustained through the film. My own assessment is that it's a film with often brilliant moments that fail to cohere into a brilliant whole. 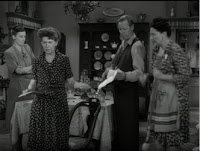 Part of what weighs Verdoux down - yet makes it fascinating - is the yoking together of Chaplin's silent style with elements from whatever prestige style was prevalent in the mid 1940s. Thus, scenes can be staged in shockingly frontal, distant framing in long take (see right), while others use a repeated slight track in, a flourish that comes across as tic more than style.

I'm discovering, too, as I watch the studios' output from this year more closely that while violation of the 180-degree rule may have been rare in the classical years, it was more common than some might think: 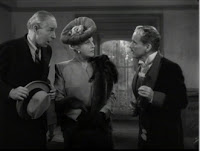 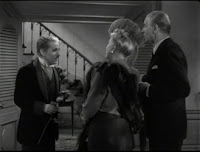 And of course, I'm fascinated by the continual presence of the twin fashions of the postwar years: voiceover narration and documentary footage. The narration is perhaps closest in style to the Mankiewicz use (Letter to Three Wives): playful, literary, and readable as a voice. The documentary footage is more striking. The film is so farcical and ahistorical (it's hard to tell the film's setting in the French bourgeoisie of the 1920s from the 1880s) that the eruption of a typical Capraesque montage sequence into a newsreel procession of World War II seems disjunctive. 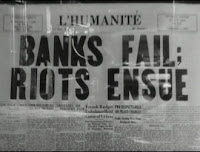 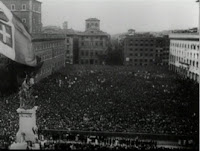 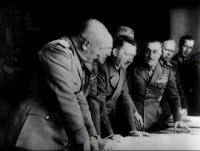 It's all tied to the ultimate thematics of the film (business=crime) that don't have the crime film conventions to justify their harsh vision of capitalism (and the military-industrial complex). It's the flip side of the argument that the crime films (say, Force of Evil could carry leftish content that more serious dramas could not; if the content could not be told in other genres without extreme resistance, to what extent did it get across in any?
Labels: 1947 project documentary-fiction film style ideology prestige film

glad to hear things are progressing. Keep the posts coming and hopefully i can add all of these to netflix at some point.