If you haven't seen it, I'd recommend David Bordwell's post on His Girl Friday. It's a reflection, personal and intellectual, on the cultural life of that film. (Jason Mittell teases out some implications for copyright policy.) I'd add to the film's incorporation into film studies canon attests to the influence of Film Art, which I'd read (3rd edition) in my college intro to film course, where we watched, indeed, His Girl Friday. Moreover, Bordwell includes advertisements and exhibition information from its local (Madison) run.

What a better occasion, then, to debut what I hope will be a regular feature on this blog and its 1947 project. I'd conceived of the project as a way to apprehend, synchronically, Hollywood's productions. It still is that primarily, but particularly at the intellectual provocation of my colleague Dan Friedlaender, I am increasingly curious about the distribution of these films. To that end, I plan to look at 1947 from the grounds-eye view as well, taking snapshots of Philadelphia's exhibition history.

Before diving in to look at what was playing or how much films made here, though, it's worth just noting what Philadelphia's exhibition market looked like in 1947. My roots don't run deep here, so my picture is based on ads in the Philadelphia Bulletin, on the invaluable Cinema Treasures website, and the aid of Google Maps. I'm still mapping, but so far have plotted over 100 theaters in the city limits (click for the Google Map): 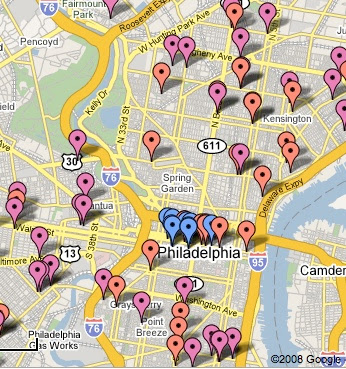 A couple of trends worth noting. First of all, cinemagoing wasn't just more prevalent then than now, its magnitude is hard to fathom. Currently there are 4 non-porn cinemas in Center City; in 1947 there were at least a dozen and a half theaters, many of which held more than 2500 seats. Accordingly, the history of cinema exhibition also gives a trace of the geography of transportation: before the widespread adoption of the automobile, cinemas were well-dispersed across the city, while today many stretches are not served for miles by one. And, too, the theaters' history is also a microcosm of urban change and development. Almost all of the Center City palaces are demolished now (the one still extant is no longer operating). Looking at the Google map, it is surprising how many former theaters in Philly are now desolate urban, post-industrial wastelands.

This mapping is about giving a synchronic snapshot of the exhibition market, but the sense of diachronic change is hard to ignore.
Labels: 1947 project exhibition Philadelphia film culture