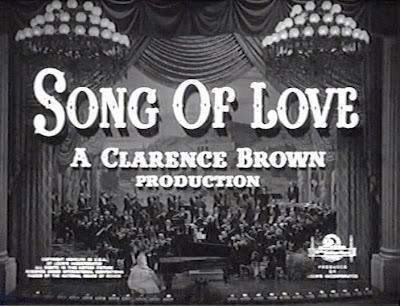 Song of Love (MGM, Clarence Brown) is an uncharacteristic Katharine Hepburn vehicle, a fairly static supportive, suffering wife role as Clara Wieck, a pianist-composer married to Robert Schumann. (below, left) Still, we do get the typical Hepburn emotion-bursting-through-restraint in parts (below, right). 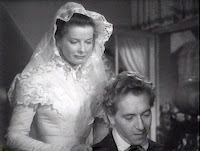 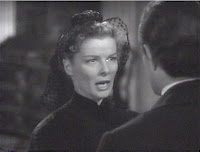 The material and tone would best be described as MGM's take on the WB biopic formula. Like in the typical biopic, Schumann's genius is unrewarded in his lifetime, yet the dialogue signals his enduring contribution to musical history. And as in the typical biopic, personal tragedy, in this case the composer's mental illness, challenges the characters' happiness. What MGM provided was the utter tastefulness, the high culture milieu, and the wistful emotional sweep of the melodrama.
It's the sort of film that could have been made in 1937, except for the subjective treatment of Schumann's mental illness. Of course, the postwar films were preoccupied with mental illness, either as social problem (The Snake Pit, Possessed) or as the result of the war's effect on veterans (Best Years of Our Lives, The High Wall) [see my post on Deep Valley for more.] This may be in the background of Song of Love, but the rendering of illness as an atonal ringing on the soundtrack points to the playfulness with transparent style that the 40s directors entertained. 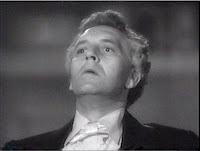 I'm embarking on a new project analyzing these MGM films. One thing that's struck me - and that I need to think more about - is the recurrence of a certain shot of the onlooking character in the theater wings. It's an image and composition hauntingly evocative, yet quotidian at the same time.
Labels: 1947 project melodrama prestige film