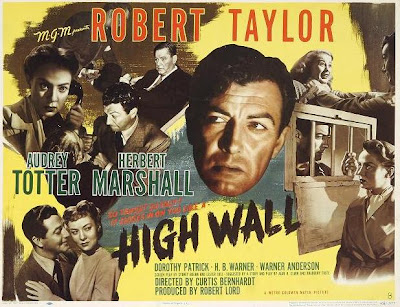 Image thanks to Wikipedia

When I last taught The Naked City I was surprised that the students found nothing remarkable about the location shooting. Used to the conventionalized world of studio lots and sound stages, I still get a frisson of the real watching it. Similarly, the shock of watching High Wall (Curtis Bernhardt) for me is to see a taut, expressionistic Dead Reckoning-ish noir coming from MGM.

In this of course, it is not without precedent. I hope to write on Lady in the Lake soon, but suffice for now to say it preceded High Wall. The two films shared the same cinematographer, Paul Vogel, and the continuity shows in the remarkable subjective tracking shots, put to better effect here than Lady. Also, subjective effects in the blackout and dream montages are worthwhile. Beyond that, the camerawork relies extensively on harsh contrast, angular composition, and surprising use of low-key lighting - it could fit well in a Fox or Warners noir.

Meanwhile, part of the fascination (for me at least) lies in two areas. First, we have another returning vet story. Protagonist Steve Kenet returns from Burma to find his war bride has been cheating on him. I'm increasingly convinced of the neat gendered symmetry between the historical rupture negotiated by the sentimental drama and that figured by the displaced veteran.

Second, The High Wall continues a 40s cycle of films dealing with psychiatry. Steve has faced head trauma, surgery, and consequently mild mental illness. He has to undergo surgery and sodium pentathol to recover his memories and discover his innocence. In contrast to the more psychoanalysis-based versions of psychological treatment, the film presents a more medical psychology of recovering self.

One of these days I will have to track down Lady in the Dark, which combines psychoanalysis and the musical. Incidentally, I'm curious about the fondness for titles with "lady" in them. Or for that matter, titles with only tenuous connections to the narrative. The High Wall is downright Zanuckian in its metaphorical suggestiveness.
Labels: 1947 project psychoanalysis