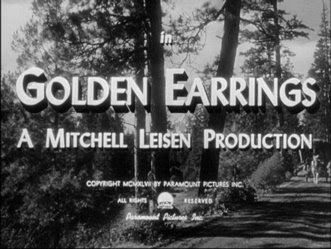 There's a danger in reifying historical periodization of Hollywood, since perioidization is useful to make sense of a wide range of empirical detail but has no real existence on its own.

Nonetheless, the late 40s do show a rapid shift in the style and sensibility of Hollywood films. To me, that's what makes the period so interesting. And it's what makes a film like Golden Earrings (Paramount, Mitchell Leisen) so fascinating. Generically, it's a hodge-podge: part espionage film, part fanciful Bob Hope-esque picaresque, and part romance. The plot involves a British agent (Ray Milland) in pre-War Nazi Germany who meets a Gypsy (Marlene Dietrich) who in turn helps him escape detection as he carries out his mission. The two star images - Milland's and Dietrich's - not only diverge but seem to belong to different aesthetic universes. Stylistically, it's schizophrenic. The credit scene (above) could just as easily belong to Intruder in the Dust: location photograph instead of pictorial glass plate painting, sans serif font instead of fanciful script, stark tonal range instead of softness. The opening scene, however, is back to the sound stage studio style, an ahistorical romanticized London: 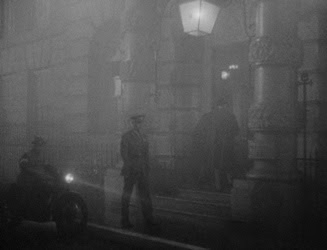 This juxtaposes plays out in the variation throughout the film, as it shifts from location shooting, sound-stage idea of gypsy settlement, and noir treatment of the Gestapo: 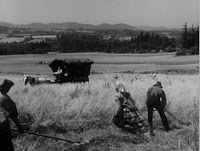 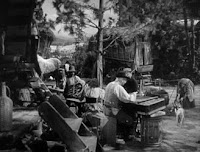 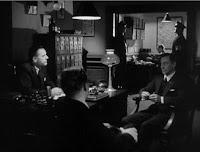 For all the stylistic changes, the film is still definitely a classical narrative at heart: a dual focus melodrama is premised on the complimentarity of male and female protagonist personal journey. Even the remarkable use of obie lights on the stars' eyes register the epiphany of Milland's character, as he comes to realize that he is now "part gypsy" and is lit in a manner similar to Deitrich. 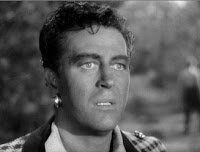 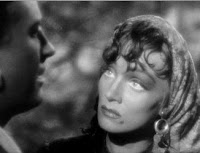 I have not encountered too many Paramount productions of 47 yet (the Bob Hope films are a prominent touchstone), but it seems to me that Golden Earrings might be a useful dramatization of the studio's unsure path after World War II. David Thomson remarks that the studio didn't know what to do with Milland after Lost Weekend. They don't seem to know what to do with Dietrich, either, of Leisen for that matter. I certainly want to explore the studio's particular position in the postwar studio division of labor.
Labels: 1947 project