People keep on asking me how my 1947 viewing has been going. It's a reasonable question, and I'm glad for the interest, but I never have a pithy answer. Numerically, I've watched about a third of the features the 8 major studios produced/released (in New York) in 1947. That figure captures how much I still have yet to go, but doesn't adequately suggest what I've done. Here's the tally so far: 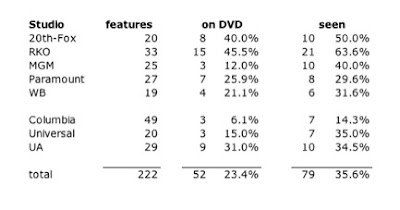 The most immediate thing to notice is that except for RKO, the big five put out significantly fewer films than the little three - these reflect in large part the relative weight of B pictures, which tend to be less accessible and less likely to face DVD or even VHS release. (By 47 the majors, other than RKO, had seriously curtailed their B units.) Factoring only the big five, It turns out I've done much better, nearly half of the features.

But there's a larger point than my progress to make: the fate of what we study depends so much on the particularity of DVD release (and the rights-ownership reasons for it). RKO and Fox have both had a decent number of their films released on DVD; one can attribute part of this to the longevity of films marketable as noir - a label less immediately accessible to many of MGM or Paramount releases. And from what I gather, Paramount has been sitting on their library, while Universal is only slowly opening theirs up. I'm just trying to figure out the paltry DVD showing of the 47 Warners' films, given their noir series - the year is hardly the studio's heyday, but a couple of titles at least seem home-video market-ready.
Labels: 1947 project