Bob Rehak has an excellent post up on the floating 3D film title, using David Fincher's Panic Room as an example of how the titles confound the normally separate registers of film discourse:

The work of visual-effects houses Picture Mill and Computer Cafe, Panic Room’s embedded titles make us acutely uneasy by conflating two spaces of film spectatorship that ordinarily remain reassuringly separate: the “in-there” of the movie’s action and the “out-here” of credits, subtitles, musical score, and other elements that are of the movie but not perceivable by the characters in the storyworld. It’s precisely the difference between diegetic and nondiegetic, one of the basic distinctions I teach students in my introductory film course.

Moreover, it seems likely (and hopefully I'm reading Bob correctly) that the use represents both auteur statement - Fincher famously relishes in "impossible" effects allowed by the digital - and a larger change in expectations about what cinematic representation can be (under pressure from digital forms, video games, etc.)
I don't have much to add to this analysis other than to express a desire for a fuller history of the title sequence in Hollywood. I've seen some good conference papers on the topic - often focused histories of technological processes  - and as usual Bordwell, Thompson, & Staiger's CHC has useful observations on the title. But it would be great to see a sustained study of film titling (am I missing one that's already written?)
For instance, in my viewing, I've noticed a crucial shift in the title sequence that takes place sometime in the early-to-mid 1950s. Where classically, the titles were presented as something like a cinematic equivalent to a book's title page, in the 1950s Hollywood films begin in media res, with the titles intermixed over action that's narratively significant but not so laden with dialogue or action that a true contrapuntal effect emerges. The Defiant Ones is a good example and maybe an ideal type for this practice, but you can see it in films as safe as Picnic. The art film and the commercial art film could push this practice to its extreme by withholding film titles to the end, e.g. Il Posto: 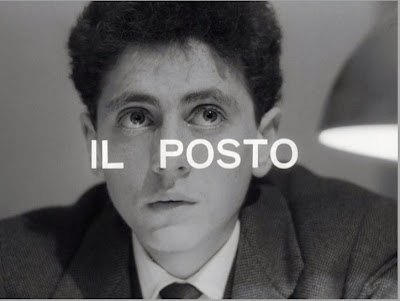 Incidentally, recent American television dramas use this effect to signal their prestige, "cinematic" quality (c.f. the delayed credit sequence of Brothers and Sisters).
So in short, there is a history of the shifting relation between the diegesis and the nondiegetic credits. A simple point to make, perhaps, but I think there are implications to be teased out. For instance, does the same shift leading to in media res beginnings also put pressure on the more traditional title sequence? The Saul Bass approach, for instance, might be seen in a larger context, even as it clearly had its own generative impact.
Meanwhile, I do need to revisit Classical Hollywood Cinema to see how much I'm reinventing the wheel. I often do. At his blog, David Bordwell reflects on film titles - the words themselves, not the titling on screen, though he has some nifty screen captures to illustrate his thoughts.
Labels: film style titling

Middento said…
I have always been fascinated by titling myself and just brought up an ancient paper I wrote on title sequences in graduate school. At the time (this is back 12 years ago), I didn't find any articles on titles per se (though at the time I hadn't yet read CHC myself either). I remember finding Genette's "Structure and Function of the Title in Literature" somewhat helpful. My questions at the time simply revolved around the notion of when a movie begins: at the title, or before? and therefore what is the place of the "pre-title sequence"? I used Tom Jones as my case study example, the title sequence of which I still show in class today.
7:19 AM

Bob Rehak said…
Thanks for the nice mention, Chris, and for the pointer to David Bordwell's discussion (which I enjoyed, as always, while marveling that the man can write so much, as always).

I share your interest in film titles' graphic presentation and am intrigued by your idea of a history of the practice. Your post on Stallion Road, in fact, was what made me decide to write about the Fringe titles in relation to Fincher's digital flourishes.
9:29 AM

Anonymous said…
Interesting post. Another factor to explain the delayed TV titles: shows have more acts than they used to, so what was once a brief "teaser" before the credit sequence now functions as one of five or six acts, which allows the networks more frequent commercial breaks. I understand this shift to be much more economically than creatively motivated. Interestingly in this regard, the shows with the most prestige on TV, HBO series and their imitators on other cable channels, often have no teaser or pre-credits act, and go straight from the "previously" to the credit sequence.
12:05 PM

Chris Cagle said…
Middento, the use of Genette sounds helpful. Maybe you should dust off that paper!

Michael, great point. I'll defer to your expertise on the matter and, besides, I'm always fond of a good political economy explanation.
3:06 PM