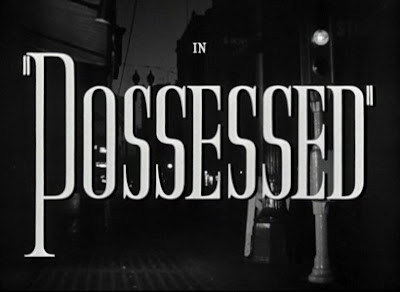 In many ways, Possessed (WB, Curtis Bernhardt) typifies the Joan Crawford vehicle: a woman's psychological inability to deal with being unloved drives her to assume rapidly shifting personalities, ranging from warm and maternal to icy and bitchy. Crawford's star image in fact played off these hot-cold transformations. (The best use I've seen of it is Sudden Fear, where it gets exploited to almost Brechtian effect.) 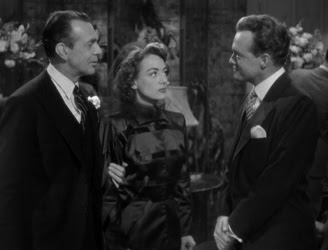 The spin here is that Crawford's character is certifiably psychotic, and Possessed takes on some of the feel of a social problem drama, with extended mental hospital scenes and psychology lectures from doctors. (It came out a year before Fox's problem pic The Snake Pit). What keeps it feeling more exploitation than prestige, more WB than Fox, is the tendency to subsume insanity to the gothic. There's the spectre of the replaced, deceased wife, and the sinister buzzer sound that will get replayed in Baby Jane. The subjective camera work is particularly striking, including an extended tracking shot through the hospital and a handheld shot at night: 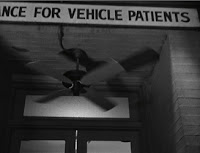 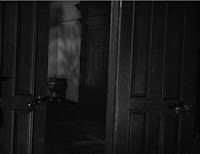 I won't spoil too much, other than to say that I was surprised and blown away by one subjective scene.

Also remarkable is the opening scene in downtown Los Angeles early morning, shot in a documentary style that lends an eerie tone to what follows. 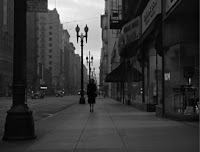 Warners may have been removed from the semi-documentary impulse of Fox and some of the independents, but here too the postwar fondness of the mode has inflected more purely generic material and pushed it in a new direction.
Labels: 1947 project fake documentary star image