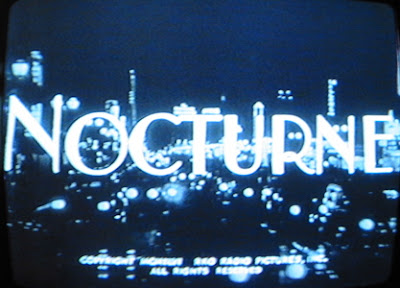 Again, we see an unexpected violation of the 180 degree rule, this time in a standard dialogue setup. But more striking in Nocturne (RKO, Edwin L. Marin) are the shot/reverse shot patterns filmed in with exaggerated depth of field.

And in general, this is a prime example within a film that articulates spatial relations in an extraordinarily complex fashion. But the stylistically baroque quality surely owes as much to expediency as design (and vice versa): the quick shooting schedule behind each of the set-ups is almost palpable.

So much has been written about noir that it’s perhaps obstinate to focus on an essay written in 1979, but I’ve always found Paul Kerr’s essay (“Out of What Past?”) to be a productive and useful argument, first for a materialist film historiography and secondarily for a combination of political economy and “ideology” in the genesis of B noir. Nocturne probably backs up his reading better than anything. I am particularly fond of the scene in which George Raft’s character goes to an RKO set for a Sinbad swashbuckler. Kerr speaks of the nighttime use of existing sets, but here the narrative builds the reuse into the setting. 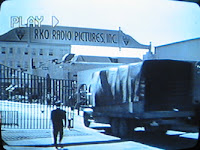 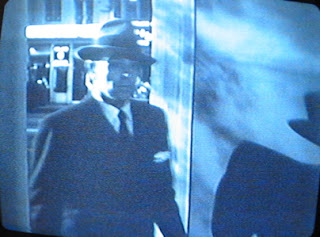 It’s not that rear projection in windows, etc., would be out of place in, say, a 30s film, but generally the practice would be to cheat the angles shot in studio interior scenes so to eschew depicting the outside world where possible. Here, the outside world is embraced, even if the budget cannot afford it.
Labels: 1947 project film style