The Sin of Harold Diddlebock 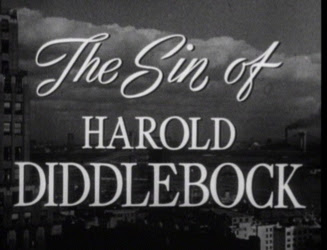 The first time as comedy, the second time as farce. The Sin of Harold Diddlebock (RKO/California Pictures [Howard Hughes]) is notable as both a rare sound Harold Lloyd vehicle (his last) and a Preston Sturges film. The continuity with Lloyd’s previous work is clear. The film begins, silent, with a five minute excerpt from The Freshman (introduced with a strange pseudodocumentary like claim to authenticity), and a climactic scene replays the skyscraper ledge scenario of Safety Last. 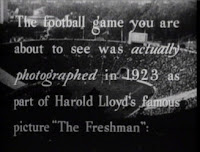 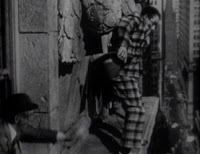 Even the filmmaking shares a silent-film aesthetic, with long takes that refuse to break up the performance, as in this shot that lasts a good four minutes without camera movement. 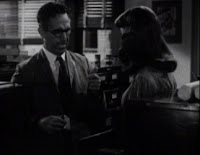 The continuity with Sturges’ better known work may be harder to place. There’s a hint of Sturges’ cynical humor in places, particularly in the Mencken-esque skewering of the white-collar world at the outset and in the madcap confrontation with Wall Street financiers. But in all the humor seems strangely broadly drawn and physical in orientation, much like a Three Stooges short. I can already see the biggest challenge of this 1947 viewing will be to understand film comedy, some of which is archaic (The Hope-Crosby brand) and some of which is now forgotten.
Labels: 1947 project