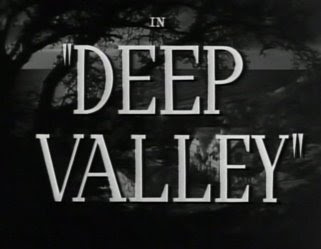 1947 seemed marked by two complementary gender tropes. On one side was a masculinity crisis figured by the maladjusting veteran, prone to violence, depression, or anti-social behavior. (C.f. The Long Night, or Son of Rusty.) On the other side was femininity under masculine seige to the point of frigidity. (C.f. Possessed, or 1948's Snake Pit). Each flowed from deep-seeded though narratively resolvable psychological troubles.

Deep Valley (WB, Jean Negulesco) presents both characters. Libby (Ida Lupino) is a young woman who, having witnessed her father hit her mother years back, remains emotionally stunted, tethered to an invalid mother, and afflicted with a stutter. Barry (Dane Clark) is a misunderstood convict who has had authority issues since his battle years. Barry escapes from the work gang and stumbles across Libby's hideaway forest shed. The two fall in love. Ideologically, meanwhile, the film pointedly questions the death penalty and abuse of justice, suggesting both how the problem film impulse informed films across a wide swath of genre and also how much had changed in Warners' output in the 40s: Deep Valley was essentially another iteration of I Am a Fugitive from a Chain Gang, only cast in psychoanalytic terms.

It is also a Negulesco film. In my current film history class, I have a section devoted to Hollywood Mannerism. It occurred to me after making the syllabus that this description is based in a simile and probably not self-evident in its meaning. Essentially, a number of directors in the late 1930s and the 1940s, pushed by the growth in prestige production, foregrounded style and a narrational distance on the material. 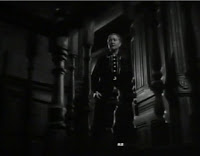 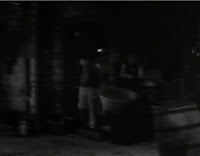 To my eye, the stylistic verve of directors like Welles, Wyler, Preminger, Hitchcock, Stevens, and Ophuls - and Negulesco - relied on an aesthetics of exaggeration. This exaggeration supplemented the invisible storytelling yet did not become outright expressionism. Thus while the shots above suggest the diagonal, low-angle compositions or subjective camerawork of noir (the second shot is a POV shot through smudged glass), the visual style uses shadow for nonexpressionistic ends and shows a gradation of shadow even in the starkest chiaroscuro effects: 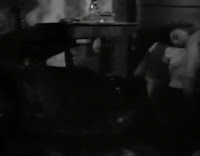 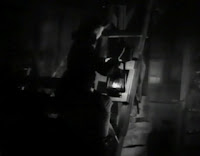 And then there's the valley, as it and the surrounding wilds form the overarching motif of the narrative. In typical classical fashion, the theme of nature is developed to the point of obviousness, yet the film offers a neat symmetry between the high angle of the opening shot (which gains significance by later revelation that it's from the vantage of Libby's home away from home) and the closing shot. 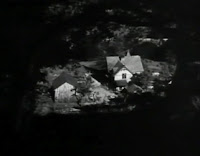 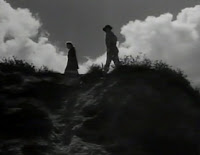 The ambiguity of the ending and that last shot is remarkable: has Jeff Barker (Wayne Morris) replaced Barry, or is something else going on? For such a pat narrative, the quiet radicalism of the narrative is remarkable.
Labels: 1947 project film style