Chuck Tryon has a noteworthy post up titled "A You-Tube Theory of Montage," assessing some of the art-world uses of YouTube for compilation films. His conclusions hinge on how the artists deploy (or don't deploy) YouTube's medium specificity, but I have a more basic, literal question: does You Tube employ a different type of montage? 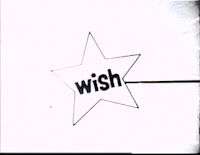 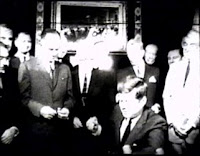 the word "wish" (in a whimsical sans-serif font connoting both children's cartoons and advertising) ironizes what follows. The exact message is hardly programmatic: the New Frontier might be an untenable fantasy sold to the American people as yet another consumer good; the public's charismatic attachment to politics might be what perished in 1963; or maybe the wish fulfillment lies in the retroactive construction of Camelot out of a particular figure of political power. Nonetheless, in some capacity, the edit presents Kennedy's administration as a wish.

Compare with the second example... 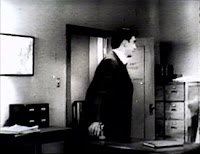 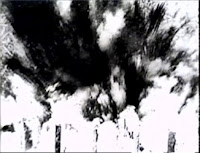 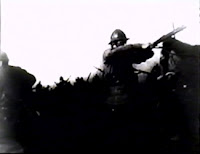 Any of these images might individually have thematic resonance with other parts of the film, but as a montage unit, they do not connect in a logical chain (the detective has no semantic bearing on explosions and battle). Instead, they signify "inundation of movies." Armed with some of the montage from the rest of the film, we can further read these three shots as suggesting that movies define American life as much as (or more than) its political reality, but that nonetheless popular culture reveals a secret key to the American psyche.

The second-order montage is even relatively restrained in Report, which stands out among Conner's oeuvre for the seriousness of its tone. The found footage film would play up the meta-level of signification more.

But what of YouTube? Possibly, second-order compilation montage has found a significant place on it. Another type of montage, though, seems prominent. Andy Borowitz's mashup of a Hillary Clinton Speech and a Tyra Banks Next Top Model flipout exemplifies it. The humor and frisson of the piece is a very particular belief/disbelief: the spectator knows the shots are disparate times/places cut together, yet the shots nonetheless synthesize into a new, seamless reality show. The same logic subtends the humor and power of the Shining trailer or the whole genre of fake and recut trailers. It's a different kind of belief/disbelief than Metz's two types of voyeurism - psychoanlaytic precepts might not be the best way to explain it. It, too, is a second order montage, saying as much about the disparity (and commonality) between official politics and reality television. It's both more audacious and less challenging than cinematic intellectual montage.
Labels: experimental film montage YouTube

Anonymous said…
This play with belief/disbelief is something that I've tried to address in both of my academic articles on political mashups (one co-written with Rich Edwards), but I'm not quite sure I've been able to put it fully together. I think the reference to Metz is really helpful here, although I think you're right that it's something quite different. Henry Jenkins' reference to a vaudeville aesthetic/cinema of attractions model seems more applicable.

Thanks for pointing to the Hillary/Tyra mashup. I hadn't seen it until now.
8:50 AM