Aesthetics of the Festival Documentary 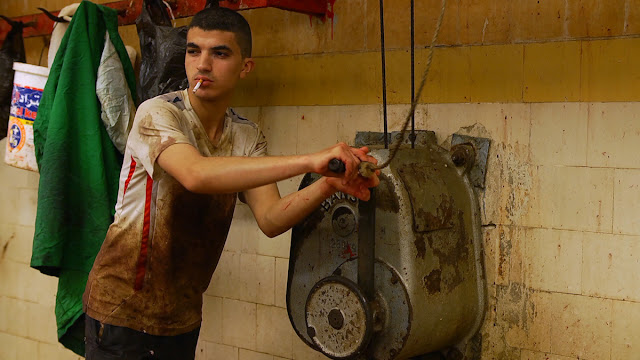 There is one shot in Roundabout in My Head that encapsulates for me so much of what makes watching contemporary festival documentary exciting. The film is a composite portrait of workers at a slaughterhouse in Algiers. Unlike other famous documentaries of slaughterhouses, Ferhani shows very little of the carnage; rather the film focuses on the worker’s interactions and unguarded moments. 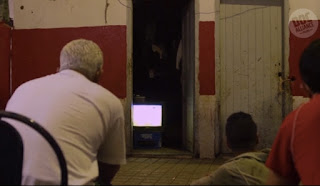 The shot in question is an interior long take of a television screen visible at the threshold of a doorway. Close to the camera, and partially captured at the frame’s edge are an older adult and a younger worker, watching what turns out to be a soccer match on the TV. Other workers walk between us/spectators and the television and more and more activity develops in this hallway until a group of workers is holding a rope, pulling on something heavy and urging other to help. 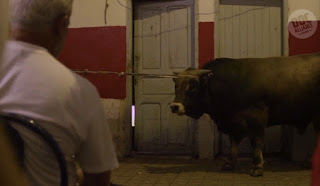 The spectator can likely infer what is off screen: a cow being led to slaughter. But the shot takes some time to reveal this, instead presenting a balletic interplay between the action shown and the action concealed, including the soccer match. Eventually, the rope goes slack and the workers rush back, frame left, while the steer enters the frame and looks at the camera. 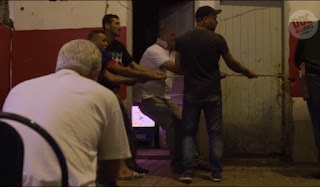 As a man stands in front of the camera, his white clothing blocking the view, the shot either elides time or the action of moving the bull along quickly transpires. As the view of the room reappears, the favored team in the soccer match score, leading the workers to rush in and cheer. 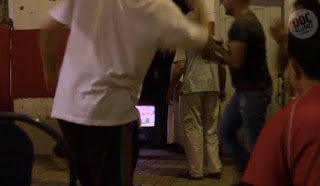 I signal out this shot because on one hand it’s resolutely observational and documentary in ethos (though Ferhani may be fudging with the time ellipsis), yet it also presents the spectator with a play in narration that like much art cinema or structural film works because the static frame contrasts with a staging of action that is anything but static. Only the action is not staged (mostly). It feels serendipitous precisely because it doesn’t look serendipitous.
Which raises the question of how typical this shot is. At a most basic level it’s distinctive, a happy accident. But it’s also an accident of the sort that’s becoming increasingly prevalent in the festival-oriented or “creative” documentary lately - not shots exactly like this but ones with a similar aesthetic. Ferhani has a particularly good idea for shooting moments like this and keeping them in the edited film, but it’s also the matter of a collective “eye” (and “ear”).

I have been formulating various blurbs about what my next book will be about, but this is as good a summary as any: it will analyze what comprises this collective eye in documenting the historical world.