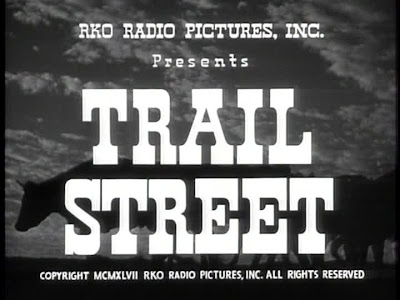 One surprise I had first encountering B-film Westerns from the 30s and 40s is how they often don't fit my generic conception of what a Western is. They may possess the syntax of the genre (ranchers, cowboy hats, and frontier towns) but lack the usual themes and narratives. Rather, they tend to be melodramas in the older sense of the term - gangster-film-style battles between criminal elements trying to monopolize business illegally and forces of law-and-order. They lack the outsider-hero function and man-vs-nature thematics of the A Western.
Trail Street (RKO, Ray Enright) occupies a middle position between the A and B ideal types. Even stylistically, it has both the cheapness of lighting setups that are too hasty and minimal to disguise the multiple shadows cast by unmotivated lighting sources. 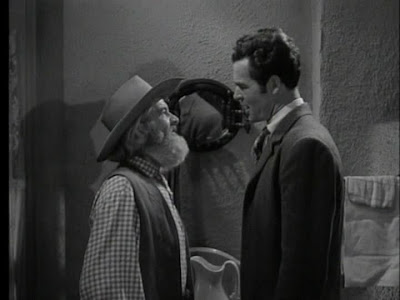 ... while at other points camera movement and cookie-lighting common to A films give the scenes depth. (DP is Roy Hunt). 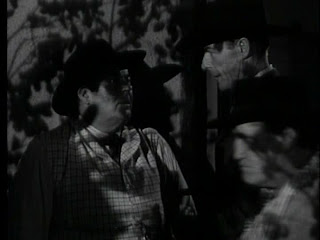 Narratively, it contains elements of both the crime melodrama and the A Western, with a narrative that starts off centered on the battle between ranchers and farmers but then explores the themes of overcoming nature, through Robert Ryan's concern to discover a way to work the land, and of social belonging, especially with the introduction of the Randolph Scott outlaw hero. Along the way, the film evokes the genre iconography, from the high-key wedding to the low-key shootout to the villain dressed in black. 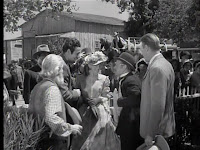 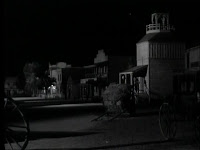 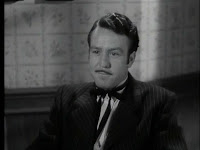 Where Trail Street seems most ambitious, modern even, is in its transformation of the usual Manifest Destiny ideology implicit or explicit to the Western into a commentary on postwar prosperity. In this it predates Red River. The film opens with a documentary-style scene of drought facing Kansas, complete with voiceover narration, shots lifted from Pare Lorenz, and Soviet-style montage/framing: 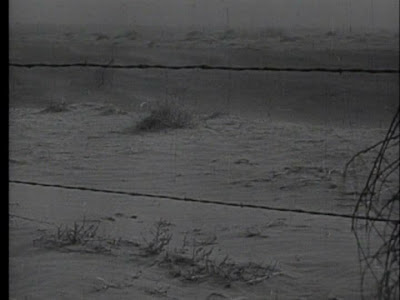 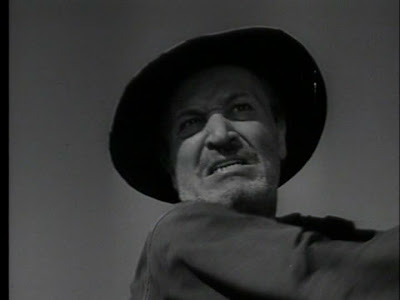 The battle of farmers to eke an existence out of the inhospitable soil figures the American economy coming out of the Dust Bowl and Great Depression. There are multiple heros in the film, but the most alluring one is the structurally-absent Kansas agricultural university, who provides the scientific knowledge that resolves the narrative.
One of my running convictions through the 1947 viewing is that the films of this period reveal surprising connections, aesthetically and ideologically, if we're just willing to look more closely.
Labels: 1947 project documentary-fiction film style