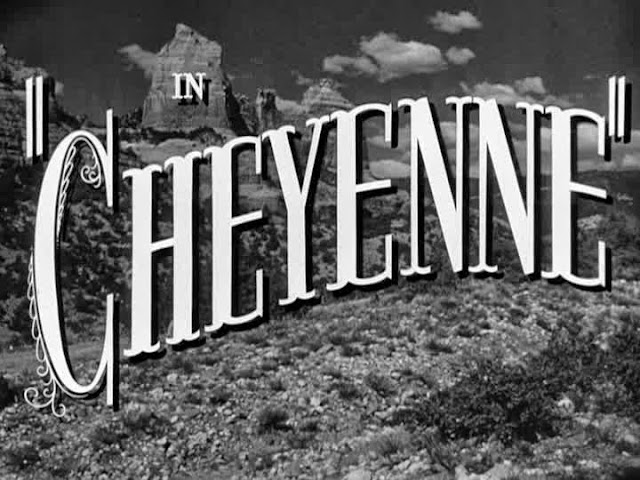 Someone asked me what I look for when I blog on these 1947 films. There's no one answer, since I try to be open to these films. I do draw on my main critical interests and look at the films' style, the way they give insight into the functioning of Hollywood as an industry, and the ideological reflections of these films' historical context. And I'm interested in the kind of historical narratives movies tell: what's lost that we can rediscover, what points to vital historical changes, and how we can use or resist narratives of progress or evolution in our film histories.

Here's an example of the multivalence of what I look for. 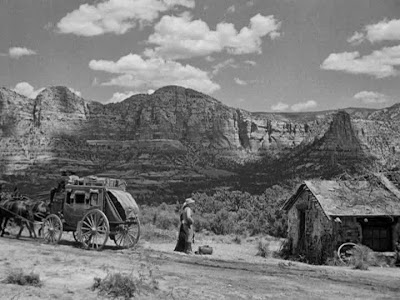 1. Genre. I'm not an expert on the Western and cannot make a claim I've watched widely in classic Hollywood Westerns. All the same, there seems to be a pattern that I see in the scholarship and criticism on romantic comedy: the canonical examples privilege the 1930s and the 1950s and tend to see the 1940s as a redundant null period in the genre's evolution. With Westerns, of course there are important exceptions, like My Darling Clementine or Red River. I don't know the status of  Cheyenne (Raoul Walsh, Warner Brothers) among fans or scholars of the Western; it's certainly known to Walsh fans and more knowledgeable auteur critics. But from my someone uninitiated perspective, the impressive thing about Cheyenne was the way it manages to be a nice in-between example of the genre, between the neo-classic A-Western inaugurated by Stagecoach and the "adult" Western of the 1950s. And yet, it does not feel like simply a stepping stone in a teleology but encapsulates much of what's distinctive about 1940s Hollywood. 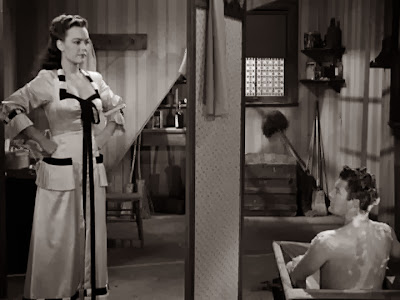 2. Gender. One twist in the genre is that the romance is played up narratively and the sexual innuendo amplified. And with this, Jane Wyman has a meatier role than anything I've seen her in. Clearly, the film is in dialogue with the screwball/sophisticated comedy and the film noir. One of the opening scenes has a fun It Happened One Night resonance. 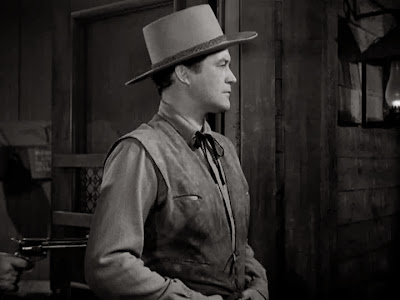 3.  Editing. True to Walsh's auteur reputation, the direction is both assured and full of stylistic flourish. What I have less historical knowledge to talk about is the editing. Simply put, I found the editing to be superb, particularly in its pacing. This was noticeable particularly in key action-y scenes, but throughout has a surprisingly "modern" in feel for a 40s film. The film definitely makes me want to learn more about classical Hollywood editing both as aesthetics and as industrial practice. 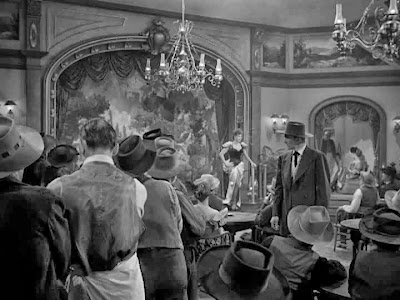 4. The rule of thirds. I can't speak to compositional trends in the 1930s, but in the 1940s with the deep space trend there's a marked tendency for compositions that split the geometry mid-frame rather than on the third. The shot above accordingly is to me a quintessentially 1940s shot. 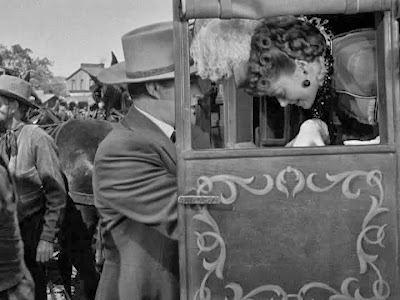 5. Tight framing. At the same time, there's the nascent trend toward tight framing. David Bordwell has pointed out that even pastiches of classical Hollywood do not put enough compositional space for actors. Walsh (and DP Sid Hickox) go for several tighter framings that show that by the late 1940s, Hollywood was starting to change its approach. 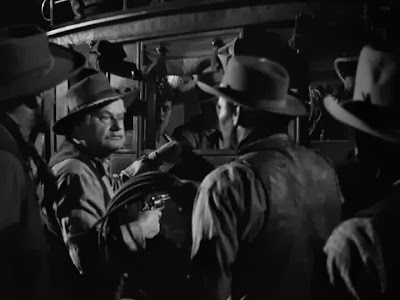 6. Social commentary. Cheyenne is no Ox Bow Incident, but the mention of a lynching in 1947 seems pointed: a commentary that film raises, but incidentally. For a genre that's often read as a conflicted but partly reactionary nostalgia for a pre-Federalized West, Cheyenne feels remarkably pro-law-and-order. It's hard for me not to see this stance as related to the lynching commentary. Though removed from explicit political reference or allegory, the film just feels like liberal-consensus narrative to me.

7. Warner Brothers. There's a lot to say about Walsh, Hickox, and the studio house style at Warner Bros. But it's worth pointing out the style of the screenplay seems distinctive to the studio. It's not as if other studios weren't producing good films with strong scripts. But Warners seemed particularly invested in the story - and a particular Delmer Daves' kind of gripping action narrative - as a way for both prestige and showmanship. Again, I wish I had more to say about the screenplay form.
Labels: 1947 project ideology style