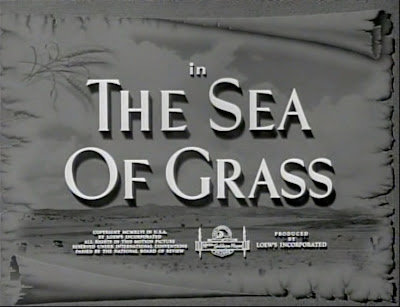 Sea of Grass (MGM, Elia Kazan) is just the kind of film that fascinates me as a scholar but gets almost universally ignored by all but the most hardcore of Classic-Hollywood cinephiles. (Much of my 1947 viewing would fall into this category.)

To begin with, the film is almost a test case in auteurism. It is both an outlier in the Kazan ouevre – much like Kubrick with Lolita, Kazan reputedly disavowed Sea of Grass. It is different from his other work and would suggest the importance for the studio as a major determinant of film aesthetics. For Sea of Grass is decidedly an MGM product, in distinction to Kazan's normal 20th-Fox home: Standling's cinematography seems a world apart from

Tonally, the film is an awkward mishmash between safe MGM programmer style and new directions in 40s and especially postwar film stressing realism and complex characterization. The lyrical shots of prairie grass are followed by much more typical studio lot shots. 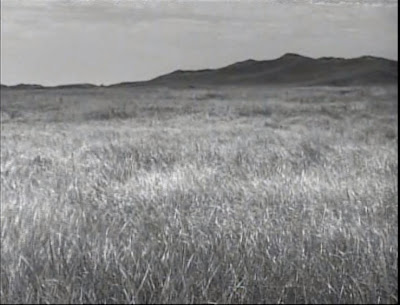 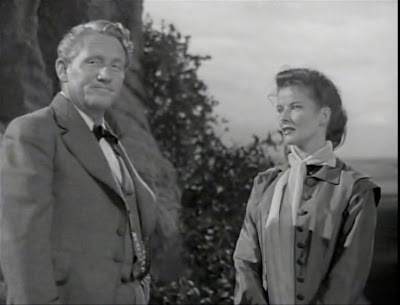 The narrative is not too far from The Romance of Rosy Ridge: an outsider arrives on a small, frontier town only to step into an ongoing feud. In this case, though, the outsider is Lutie (Katharine Hepburn) who has come West from St. Louis to marry Col. Jim Brewton (Spencer Tracy). The feud is a battle over resources: Brewton leads the cattle ranchers, who are resisting settlers coming to farm. His means are to corrupt the legal system and to terrorize the farmers. Essentially, enclosure and agriculture will mean the end of ranching. The land, Brewton warns, will not support farming.
And yet the film is disctinctively Kazan's in its thematics. Ideologically, the rancher-settler divide sets up an allegorical battle between local and federal authority that cuts across many of Kazan's work. Thus, the ranching tale is ultimately about two battles – one over the New Deal, the other over civil rights – that he would return to more explicitly in Wild River.

Eventually, Brewton is right: the land cannot sustain agriculture and eventually the town is turned into a dust bowl. As Brice (Melvyn Douglas) suggests in voiceover that “one of these days we'll be able to get it right" with planned agriculture and dams, a montage sequence uses documentary imagery that could be straight out of Plow That Broke the Plains. Maybe it is. 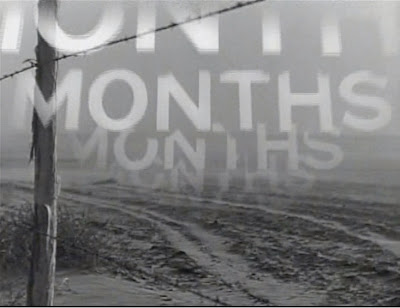 Additionally, Sea of Grass demonstrates how hybrid generic categories of MGM's 40s output tended to be. Rick Altman in Film/Genre argues that classical Hollywood in fact tended to operate by optimizing multiple generic appeals at once. His example of Only Angels Have Wings points out that advertising played up adventure and romance simultaneously. Even if this was generalized practice (I gather it was), some studios in 1947 were inclined to films that seem more straightforwardly generic (RKO), other studios (Fox) at times tried to avoid the taint of cinematic genre, while MGM combined a sentimental melodrama with almost every genre: biopic, Western, comedy, musical. Sea of Grass in Altman's terms is semantically a Western but syntactically a sentimental melodrama.
Finally, my biggest surprise with the film is how downbeat it is in its characterization. Maybe MGM made other films like this (I'm still tracking their output down for 1947), but I've yet to see anything like this from the studio: the Brewton character pushes the Spencer Tracy flawed-hero image to the cracking point, Lutie manages to be both selfish and masochistic, and the restorative ending hardly feels redemptive. I credit Kazan less than the source material; it seems that MGM was trying to match a morally complex novel to its studio style.
Labels: 1947 project fake documentary ideology

Bilge Ebiri said…
Interesting piece. The film does have its moments. If you haven't already, you should read Kazan's description of the shooting of this film in his autobiography. He apparently showed up in LA thinking he'd be making the film on location. Then, his first day of preproduction, his producer came to him with "thousands of feet of the most beautiful stuff you've ever seen." He showed Kazan all this footage of the prairie, random cowboys, etc. Kazan said, "This is all very nice, but what is it?" Turns out it was basically all his prairie inserts and backdrops for all the riding scenes. They'd already shot it. Everything else was to be done at the studio.