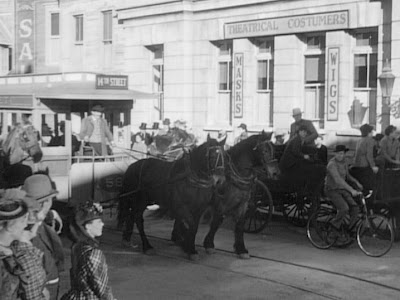 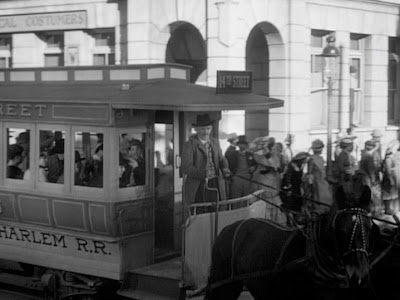 ...and finally turns a corner and is framed against a building itself in shadow... 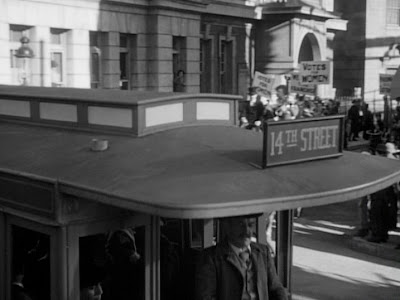 I often think of the grayscale challenge facing black and white cinematographers primarily as two dominant practices: three point lighting (to give roundedness) and shallow focus (to differentiate the figure from the background). The above shot suggests the complexity possible, though: as the carriage moves, we have three separate gray shade contrasts with the background. The first (and shortest) is the least distinct, but all of them keep foreground and background separate.

It is this ability that preoccupied the trade press coverage of cinematography and made cinematographers like Leon Shamroy respected in the industry. Shamroy's style, in fact, seems built upon a play with grayscale. All good cinematographers were supposed to keep gray tones separate and foreground-background relations defined. Shamroy went further in a) exploiting mid-gray tones for their own sake, but also b) in pushing the challenge as far as he could take it. Here, for instance, is another shot from Lillian Russell: 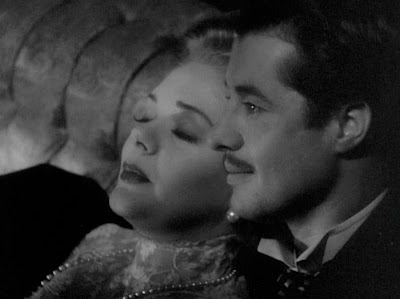 Female and male actor are lit differently, but not as drastically as the soft-light/hard-light contrast that defined more pedestrian classical cinematography. Here, Shamroy lights Alice Faye's face so that it is both more illuminated and more shadowed than Don Ameche's. But not much more. The difference is just on this side of perceptability.

And to think this stylistic verve takes place before a wave of experimentation that would mark Shamroy's later work for Fox.
Labels: cinematography classicism/post-classicism film style