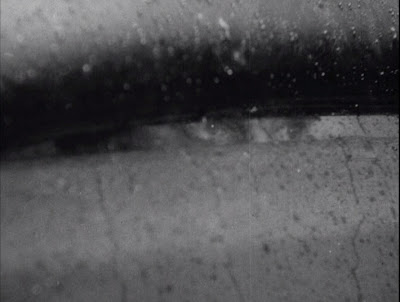 I have not foresaken the 1947 project, but my viewing has been on hold as I try to track down more films and find the time to rewatch films I had already seen before I began the project. Thanks to those who have asked about my '47 viewing or have linked to this blog.

In the meantime, though, I have taken on a mini-project of focusing on cinematography. I come more from a literary-criticism background in film studies, not art history or practice, so some of my study about cinematographic style is on a learning curve. Still, it has been enlightening and has given me a new lease on appreciating the work of 30s and 40s Hollywood in particular.

The above still is from You Only Live Once (Fritz Lang, 1937), photographed by Leon Shamroy. I'm not sure it's a typical Shamroy shot - which I'll describe more in future posts - but it struck me for its surprising abstraction. Moreover, it does involve a play in grayscale that is typically Shamroy's. Which brings up another point: the way we often read visual style is cued to the director more than the DP. In some instances this makes sense, because the director is nominally responsible for narrational choices and textual analysis can privilege narrational elements over textural ones. But take another still from the film: 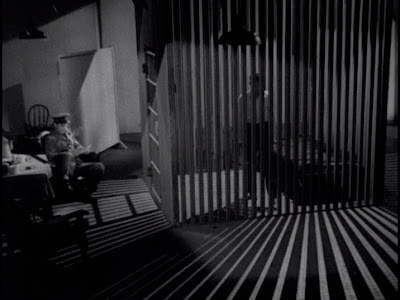 This in its iconography is more classically Langian, with its geometrical use of stark light and shadow for thematic ends. And yet most of You Only Live Once is not shot or lit this way at all. Shamroy's work has perhaps a wider range of experimental latitude because of being a Lang and a UA/Wanger film, but more or less the film is lit and shot within the norms and expectations of a classical Hollywood film. It is the interplay between experiment and norm that makes the cinematography of the 30s and especially the 40s so fascinating for me.

More to come. I am also happy to have any suggestions for reading or viewing. It's my feeling that cinematographers' style remains under-discussed, especially before the New Hollywood "masters" arrive on the scene.
Labels: cinematography film style

Paul Harrill said…
I'm not familiar with enough of his work (there is a lot of it) to claim "auteur" status for Rudolph Maté, but he's worth investigating.

The man shot Vampyr, the Passion of Joan of Arc, and Michael, among others before coming to the US and shooting Love Affair and Dodsworth. I've not seen Dodsworth in years (as I remember, it has a lot of Wyler-style deep focus), but it's tough for me to not think of Dreyer's films when I see the extraordinary sequence in the chapel in "Love Affair."

Of course, it's impossible to know if that's Maté doing his thing, or if McCarey had seen any of Maté's work with Dreyer and referenced it in discussing the feel for the scene.
1:13 PM

Chris Cagle said…
Yes, I'd love to watch more Maté films and hope to at some point. For research purposes, I'm starting with 20th-Fox and moving out from there.

What do you think of Maté as director? I really liked Union Station.
1:17 PM

Paul Harrill said…
You know, of Mate's directorial efforts, I think I've only seen DOA, and that was years ago. (I've also seen the remake with Meg Ryan and Dennis Quaid.... no need to revisit that one...)
10:53 AM