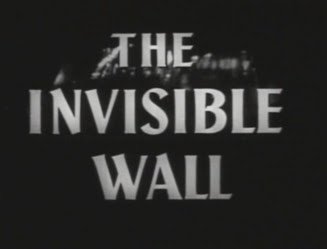 So far I've kept Povery Row out of my purview of the 47 viewing, with the result that B films are underrepresented in my yearly sample, since by the late 40s, the major studios were retrenching their B outputs in favor of A films. Invisible Wall (Eugene Forde, Sol Wurtzel/20th Fox) is an interesting example of an spin-off independent production company allied with Fox. It's neither quite a true Fox B unit feature nor a Poverty Row release - at least to my understanding.

Stylistically, the film starts off in typical B style with basic coverage. The heavy reliance on medium long shot, for instance, fits the need for maximum narrative information with minimum setups. 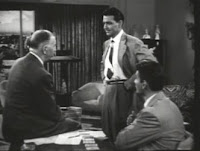 After the first plot point, though, more typical noir stylistics come into play, with a series of deep focus, angular, or low-key compositions. 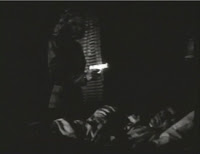 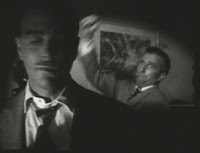 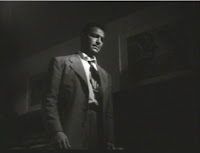 These correspond, of course, to the unraveling of enigma and of the unreadable woman.

As for the economic ideology, the motif of gambling runs throughout, with a none-too-subtextual Force-of-Evil-ish equation of legitimate and illegitimate business.
Labels: 1947 project