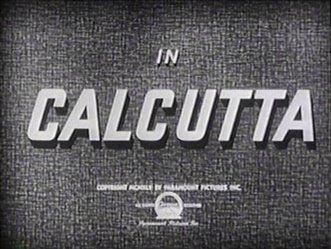 Part of the effect of an extended project seeing a lot of similar films is that the repetitions bear noting even at danger of retreading familiar ground. To that end, Calcutta (John Farrow, Paramount) is typical on a number of fronts. For starters, it represents a vein of Hollywood Orientalism that sometimes colored all aspects of narrative, music, and mise-en-scene but particularly marked subgenres of "exotic" locale. From the imdb plot summary:

Neale [Alan Ladd] and Pedro [William Bendix] fly cargo between Chungking and Calcutta. When their buddy Bill is murdered they investigate. Neale meets Bill's fiancée Virginia [Gail Russell] and becomes suspicious of a deeper plot while also falling for her charms.

Paramount seems to have specialized in this material: their 1943 Night Plane from Chungking was itself a remake of their Shanghai Express. I'll have more to say about this orientalism when I write up Universal's Singapore, but in some respects Calcutta muddles Eastern geography further, combining India, Burma, and China in some strange unspecified cultural imaginary that's both incidental (the main characters are white and American) and not (the noir sense of enigma draws metonymically from the "enigma" of the East).
.
The film, too, exemplifies a workhorse classicism, neither loose nor flourishing in its style. The blocking, for instance, anticipates character movement as a series of distinct compositions. 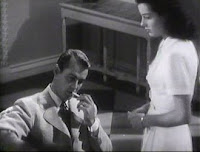 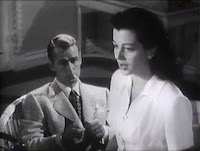 I have not done the research, but the style strikes me as a well-made B, an intermediary programmer (A or B), or at best low-A film. The narrative is not as fully developed, nor the production values as high as Paramount's more prestigious A pictures.

Finally, while like many noirs, the femme fatale is drawn in full unknowability, the lighting obsessively distinguishes a harsh, dark light on Ladd from a glowing bright light on Russell. 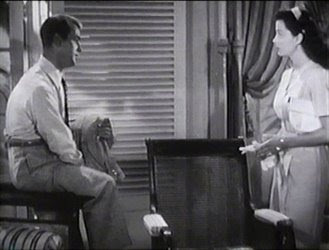 I find Ladd's star image fascinating. I think there's a real study to be done to explain its dimensions and appeal, historically. There's a case to be made that he marked a new style of American screen masculinity (hat tip to Marc Vernet for his observations along these lines - "Film Noir on the Edge of Doom"). And perhaps more than stars whose images seem immediate, something about Ladd's image resists semiology: what's most important in it is an apparent spectatorial desire for sadistic, suave patriarch.
Labels: 1947 project classicism/post-classicism orientalism star image

I'm not an expert on postcolonialism/Said, but I am interested in "exoticism" in film history which Hollywood abounds in. But so do other national cinemas including say India. Are there ways to think about cinema's use of "exotic" locations (all the way back to early cinema's travel films) that isn't so dependent solely on Said's Orientalism?

How do we think about exoticism when it moves from East to West? Or even, say, French intellectuals of the 40s/50s exoticization of American culture?

Chris Cagle said…
Good question. There are limits to the core-periphery model, and a number of scholars have turned to transnationality as a way to understand the phenomena you describe. I don't have a good answer: on one hand it makes sense to talk about the way America imagined the exotic South or East - ways that seem orientalist or othering. On the other hand, these films played in other countries, and I would love to dig in deeper to see how the prospect of international markets impacted Hollywood's decisions for story material, presentation, etc.
10:43 AM