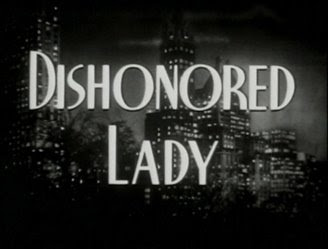 Frequently, I've been making the case that the gender representations of the 1940s films are complicated, interesting, and worth interrograting. I wouldn't say that Dishonored Lady (Robert Stevenson, UA/Hunt Stromberg) isn't worth interrogating, but it has to be the most straightforward manifestation of hegemonic gender ideology and clearest example of what 1980s feminist film theory diagnosed and critiqued: the class and psychological containment of the career and sexually liberated woman. Madeleine (Hedy Lamarr) is a successful art editor who sleeps around, until she cannot take the dishonor any more and decides to start a new life - and new "real" romance. (The narrative relies some on implication, but not much: subtext has become text.)

Lamarr's star image gets the usual exoticist treatment here, whether in costume or in von Sternbergian soft-focus closeups: 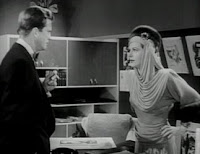 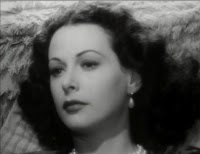 The mystery is both transparent construct and the element that keeps unpredictable generic elements (noir, women's picture, courtroom drama) in balance.

Stylistically, the film is a good typical example of a fully-formed classical style that avoids stylistic panache. It is, in other words, a good exemplification of a "genius of the system." A series of three connected expressive tracking shots in the courtoom scene, for instance, lack the stylistic verve of The Paradine Case but nonetheless connote the emotional impact of the scene without spelling it out... 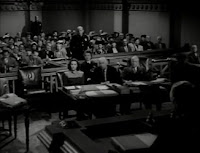 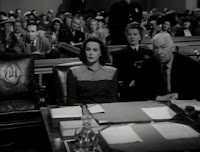 .... while the staging of the climax is more complex in shifting between 1st and 3rd person than contemporary viewers might expect from the material. 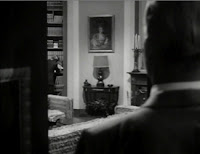 Less complex is the final scene, where the paternal gaze of the pscyhiatrist looks on the reuniting of the couple: 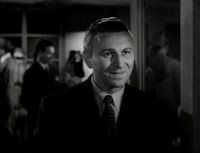 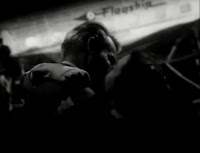 The film is surprising in its equation of psychiatry with the patriarchal "truth". Yes, I know other films do this, but Dishonored Lady provides little fodder for against-the-grain reading. Little counters the suggestion that Madeleine's "dishonor" comes from a psychological neurosis.
Labels: 1947 project feminist criticism