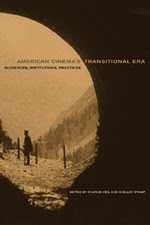 It's rare that I find an edited volume so useful as Charlie Keil and Shelley Stamp's American Cinema's Transitional Era. Part of the strength is simply the dynamism of the subfield itself. The rush of critical energy and enthusiasm that scholars brought to reevaluating early cinema a few years ago now seems apparent in the scholarship on what this volume considers the "transitional era," the period between the "cinema of attractions" that Tom Gunning diagnosed and the fully institutionalized cinema of diegetic absorption that scholars have called classicism.

I've mentioned before the methodological self-confidence and maturity I see in the field today, and this volume is a good example: sharp, concise methodological reflection in the historiographic essays (Keil, Brewster, et al.); more tailored readings of textual moments (Rabinowitz on Coney Island films; Richard Abel on the Western; Jaqueline Stewart on racial representation); and a useful range of industrial and legal histories (Ben Singer, J.A. Lindstrom, Lee Grieveson, Scott Curtis) all make this a well-rounded volume, as good an introduction to the period (better, even) than a monograph such as Eileen Bowser's Tranformation of Cinema. In fact, for all the value in a straight-forward historical account, American Cinema's Transitional Era demonstrates the potential of an edited volume to show history as the contested terrain of diverging, overlapping, or complementary explanations of cinema's past.
Labels: book reviews film history pre-classical cinema