Having taught Only Angels Have Wings this week, one thing I couldn't help but remark on was the lighting. At times, it takes on an ethereal quality, which is aided by the not-quite-deep focus and Hawks' tendency to stage in depth. But beyond its overall texture, the lighting can be read more semiotically. Here, in an early scene, Bonnie Lee (Jean Arthur) peeks in on a room of locals dancing to a Latin folk song: 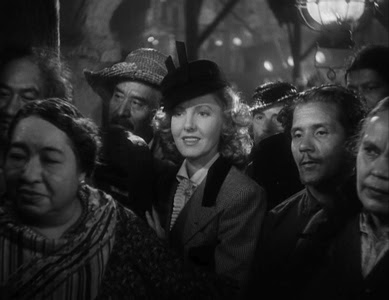 The glamour photography conventions (with a very strong kicker) are not unusual in themselves, but here the pool of light on Jean Arthur and the dearth of light on the figures around her undoubtedly highlight, even construct, the difference of white femininity amid the ethnic Other. The white/ethnic distinction is only highlighted by the eyeline match (characteristically, a POV from a "native" is an impossibility): 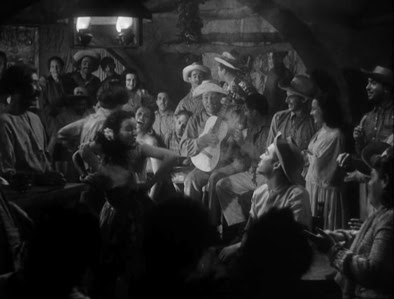 Now, the lighting direction is reversed, with the strongest light coming from beneath and behind the figures. With potential narrative motivation (the light comes from a fire or hearth?) the effect is to romanticize the locals for the white American gaze.

Of course, this sort of reading - while perhaps continually needed - is hardly new and may even seem banal to film scholars conditioned to similar readings. The film strikes me as a fascinating hermeneutic circle... a repository for all the thematic seriousness of auteurist readings (such as Robin Wood's analysis)... a case study in the formal elegance of classicism (Bellour may have written his "Obvious and the Code" about The Big Sleep, but almost every scene in Only Angels Have Wings seems to me to share the same symmetry of construction)... an example of ethnic othering (the thematics are less self-aware than the border crossing Stephen Heath locates in Touch of Evil, but are structuring nonetheless)... to the history of style questions Bordwell and Thompson have been discussing at length in their blog (the reframing in the film, in particular, is careful and composed).

There is such a tendency critically to think we already know all there is to be known about Hollywood in its classical period and pedagogically to treat the studio films as either bad object or unapproachable "classics" frozen statically in a receding past. I do wonder if with some effort we can continue to rethink the American cinema of the 1930s, 40s and 50s and to inhabit the previous layers of scholarship while moving forward in our understanding. I'll try to reflect more on what I mean in further entries here, but Only Angels seems as good a placeholder for any for my developing thoughts on the matter.
Labels: classicism/post-classicism

Daniel Kasman said…
You astutely analyze the lighting and cutting in this scene. I wonder about how this contrasts to the tone as well as character, though. Arthur is far from approaching this scene as one plunging into the wonders or exoticism of the exotic Other. She is definitely constructed as an individual and an outside in the scene, to be sure, but I also think she recognizes something in the music and the dance that she finds in herself, a commonality or a similarity, which is what leads to the gestures of appreciation and recognition that follow these two screen grabs. I adore this movie!
9:21 AM

Anonymous said…
phyrephox makes a good point. Jean Arthur's character is obviously a white, American, female stranger in a strange land (and never more so than when she finds herself among the white American male/mail pilots) -- but she finds herself into both worlds through music. Cary Grant's "Peanuts" gives her a way into his world. You don't have to be white, American, female, a film theoretician (or even an adult) to understand that we're being introduced to a main character (even if you don't already know Jean Arthur is the star), and that we're sharing her experience here. Even kids -- from any culture -- understand the grammar that sets up that POV shot.
6:49 PM

Chris Cagle said…
Indeed in terms of the narrative, Arthur shows an appreciation of the music, and the locals wave at her in appreciation of her appreciation. And the comments above unpack some of the dynamic of this scene that I did not spell out.

But I will maintain on reading form against the explicit characterization here. There's something problematic amid the positive, literally glowing view of Latin America here. First, it's possible to have surface appreciation at the same time as cultural condescension - just witness Song of the South. Second, cultural appropriation might not be always a bad thing, but when so consistently the North/West appropriates the South/East as a foil, indeed Other, to reflect on its own conditioning, without ever possibly considering the subjectivity of the Other, that's problematic. In some ways, that just how Hollywood worked (works?): narratives were about white folks, the individual focus prevented alternative viewpoints, the star system had its own expectations, etc. But from a certain vantage, the lighting choices play into ethnic/national othering in a consistent way, even if thematically, the film uses this othering in more complex ways than simply denigrating a foreign people.
10:29 AM

What I find more interesting (and far more insidious) is the phenomenon, which Manohla Dargis recently described, of films that fetishize Africans in the name of speaking on their behalf: "Like “The Constant Gardener,” [Blood Diamond]h betrays an almost quasi-touristic fascination with images of black Africans, who function principally as colorful scenery or, as in the gruesome scenes inside rebel training camps, manifestations of pure evil."
11:15 PM