First, I should recommend Michael Newman's blog, zigzigger, which has excellent ruminations on film and media studies and media culture in general. Check out, for instance, his analysis of the new sitcom.

Michael raises in the comments of my post-classicism post an excellent question, which deserves a full post in response:

What about "intensified continuity," DB's term for the contemporary Hwd style? It has the virtue of being specific about what it is describing: framing, lenses, and editing. My big problem with post-classical is that it implies a difference in narrative causality/unity between old and new Hwd movies. I find the argument that new Hwd movies generally have less narrative unity/causality to be unconvincing, which is one big reason I find the term post-classical to be more confusing than useful.

I'm all for a more specific term to describe editing in contemporary commercial cinema, and David Bordwell's work in this regard is extremely useful to achieving that specificity. I have some reservations about the "intensified continuity" term: if continuity changes, it's toward relaxation, not intensification. What gets intensified instead is the narrative analysis. So if I had the sway in my power to coin and popularize a term (and I don't), I'd suggest "intensified analytical editing" instead.

But quibbles aside, there's a larger issue lurking: whether studio-era Hollywood actually possessed more unity or sub-quality of classicism than today's Hollywood. I maintain they did. Take, for instance, another scene from Only Angels Have Wings: 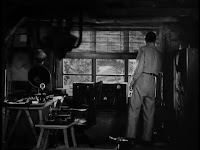 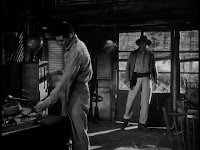 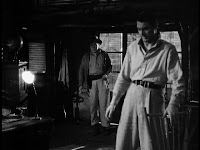 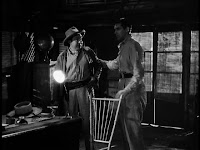 Here, though the camera pans to follow the characters, it reframes the action so that each paused moment in the blocking creates a balanced, ordered composition. In some ways, this reframing tendency was a signature style of Hawks, who used pans far more than tracking shots. On the other hand, David Bordwell's analysis of blocking and framing in Homocide and Mildred Pierce suggests that the principles of compositional balance and order were not unique to Hawks but in fact were a primary mode of classical Hollywood.

That balance and order, narrowly construed, is, to my eye, missing from contemporary cinema, which accepts a much more improvisational aesthetic (try pressing the pause button on a handheld shot) or at least a looser understanding of composition and space. Also, it is capable of violating the unity of time within a scene; jump cuts, flashback inserts, and other interruptions in time are now standard and fully readible in commercial, "invisible" cinema, even if they vary in frequency by genre. I don't know that any of this is a new observation - or controversial. It may simply be that we will have to weigh semantics of "unity," "balance," etc. against the critical emphasis we wish to assert. It might be worth just speaking in the most narrow sense of particular regimes of editing, narrative structure, and so forth. Yet classical Hollywood was more than continuity editing; it was a larger aesthetic mission of studio cinema, one that had implications for editing, narrative, etc., and which some have read against older art forms. Bordwell, Thompson and Staiger's volume lays out this mission, along with the particular means it was achieved, and connected it to the industrial "mode of production." It is not unreasonable to look for ways the changes in the industrial configuration changed in tandem with the underlying aesthetic mission of Hollywood. To me, that's the value of "post-classicism," even if all the conceptual moving parts to that definition don't line up neatly.

Finally, I'm a little wary of the notion that classical cinema was a storytelling system so powerful that it absorbed all challenges, its adaptation being proof of its penultimate strength. This may be the case, and we can certainly set the terms of analysis so that this thesis holds: Hollywood after all, has absorbed avant-garde, new-wave, and art-film language. Unless I'm mistaking this position, though, I'm not sure how it's different from saying that narrative analytical storytelling is the System that is flexible enough to absorb everything, including Ozu, Dreyer, or other non-classical directors. At the least, there's a danger of ascribing too much agency and power to systematicity.
Labels: classicism/post-classicism

-saying that contemporary style tends toward "relaxation" versus "intensification" can be misleading because it implies that the quickly cut, handheld aesthetic prevalent today is less formally rigorous than the more "invisible" style of the studio era. The closer I look at things like recent Tony Scott, the more I realize that what seems to be arbitrary is actually carefully planned and considered, although it gives the illusion of careless immediacy. Also, I find that most Hollywood stuff that is shot handheld still tends to generally favor classical rules of composition (vs. something like Lars von Trier).

-You write "I'm not sure how it's different from saying that narrative analytical storytelling is the System that is flexible enough to absorb everything, including Ozu, Dreyer, or other non-classical directors."

But why lose the distinction between classical and non-classical filmmaking? Shouldn't we retain a division between an art film and a Hollywood version of an art film, i.e. a film that has appropriated stylistic or narrative innovations from outside mainstream cinema?

-This is a more general thought, not directly connected to your post: I think it's better to look at the history of Hollywood style and narrative as a continuum in flux instead of a rigid classical era vs. today's new post-classical period. There were enormous changes in style and narrative from the '30s to the '50s, a period that is too often treated as a monolith - which surely isn't what Bordwell, Staiger and Thompson intended.

To put things in perspective, a lot of the same discourse about today's mainstream cinema can be seen at least as far back as the '40s-'50s (exaggerated style, emphasis on spectacle, juvenilization, reflexivity in genre filmmaking, etc.) Twenty years from now a lot of the films that seem to boldly challenge conventional norms will seem as dated as many of the late '60s-early '70s Hollywood Renaissance films (as much as I love 'em). But I bet the broad principles of classicism, including the tenants of classical storytelling, will still be there in one form or another.