The Radicality of the New Archival Doc 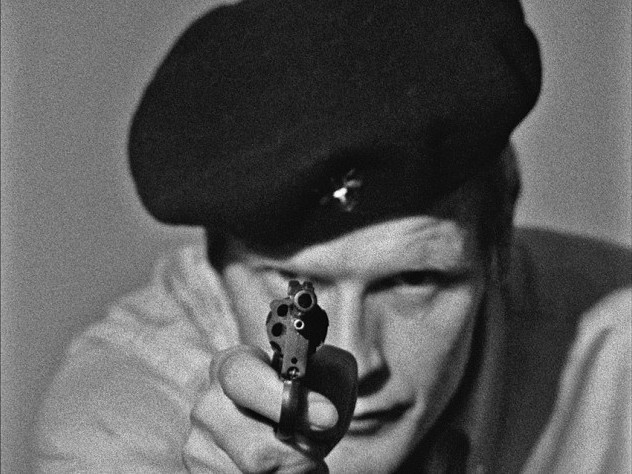 There's been a lot of exploration lately within the historical documentary that has opened up the archival footage to function in different ways than a typical recollective documentary, which subsumes the meaning of the archival footage to a rigid historical idea. In one direction, documentaries have understood the document as an artifact to be highlighted and explored for its own meaning, its own historicity and texture - I'm thinking for instance of the home movies in Our Nixon. In the other direction, the found footage film has an influence on documentarians who want to resignify official history by treating archival footage differently, obliquely - Loznitsa's or Forgacs's work comes to mind.

But what if we push both directions simultaneously? A German Youth does just that and in the process raises the question of how we apprehend the archival without a clear hierarchy of information. Mind you, the film itself is not hard to follow in its general sense: it tracks the radical German youth movement from its beginnings to the formation of the Red Army Faction (the Baader-Meinhof group) and its terror campaign. In its account, it uses only archival footage with very minimal attribution (only a few of the students' films are introduced with a title).

But if the broad strokes are easy enough to follow (and it helps that I know a little about the RAF and have seen fiction and documentary films about them), the specifics are trickier. A German Youth strives for a seamless spectator experience - and the producer answers that the filmmakers considered attribution but deemed it too confusing for so many sources - but part of me wanted some disjunction to know when I was watching contemporary news accounts or student-made footage. In fact, these distinction are crucial for me to know fully what is going on. Similarly, major political and intellectual figures pass on screen, but not being German I could have used far more attribution of them. (Wait, was that Habermas?)

It's about my limitations as a viewer, of course, but also about the blurring of lines between primary and secondary text, to use historiographic terms. One of the most interesting contributions of A German Youth is its exploration of the youth/RAF filmmaking as a cultural practice that documented and commented on the historical moment. These are both documents of the time and documentaries-within-the-documentary. 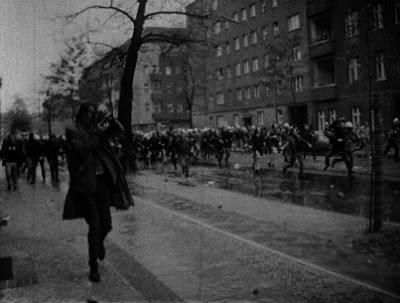 I don't disagree with the producer in one sense, since I think it's a powerful documentary, but as a viewer I found the approach far more destabilizing than he acknowledged. Just a comparison to the recent American doc, Let the Fires Burn - a film that on paper should be very similar yet is not - shows the distinctiveness of the approach.
Labels: Contemporary Documentary project

Nora said…
Hi there - we met at SCMS after your panel, and I've been enjoying your blog (and I LOVE Let the Fire Burn). Looking forward to seeing A German Youth.

A friend of mine recently wrote a great seminar paper comparing the use of ACT-UP's own videos in two recent documentaries, and he came up with some excellent ways of discussing the different strategies the filmmakers used. I'll let you know if he gets it published.

Chris Cagle said…
Nora, Thank you for the comment. I look forward to seeing your work at a future SCMS or other conference.
5:50 PM