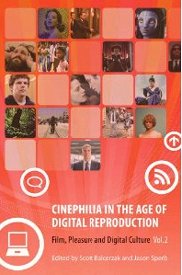 I have an essay in the newish volume 2 of Cinephilia in the Age of Digital Reproduction. I'd like to thank Scott Balcerzak and Jason Sperb for including me in their project, for their work in putting the volume together, and for their vision in bringing together film studies and film criticism at a moment in which the internet is changing the relationship between the two.

My essay, “Academic Blogging and Disciplinary Practice: Implications for Film and Media Studies,” puts forth my best articulation for why I blog and why I think more scholars should blog, too. I based my polemic in large part on what academic blogging has achieved in other disciplines, and I foresaw that film studies could adopt many of those practices. However, I have to admit that the essay now reads like a swan song for a dying practice. Academic blogging in film studies is not dead, mind you, especially since there are still some terrific active blogs from film and media scholars, but qualitatively and quantitatively there seems to be less energy and dialogue than even before. My own blog output has certainly decreased, too.

But if my utopian vision for academic blogging has been tempered, I'm not sure the entire project is lost. Networked communication will mean that academic conversations will occur increasingly outside of institutional and geographic constraints. Twitter is part of that, though it's better for some types of academic practice than others. It may be that in the future another, even easier, self-publishing format (audiovisual and/or text-based) takes the place of the weblog. Or - who knows? - the blog format may get a second wind in academic film studies.
Labels: blogging publications