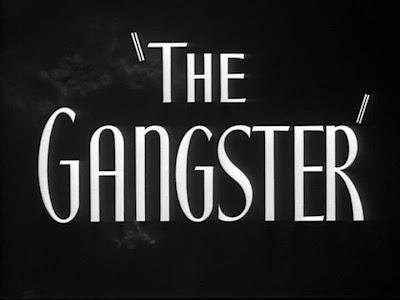 One thing I like about the inductive approach to film viewing is that it shakes many received narratives I have about film history. Canonical genre histories, for instance, tend to treat the gangster film as a cycle that dies out by the end of the 1930s, to be supplanted by noir crime films, procedurals, and thrillers. There's some truth to this, but The Gangster (Allied Artists/Monogram, Gordon Wiles) is a classical gangster story, with some noir twists.
First off, key noir visual elements are here. One tracking shot in the ice cream parlor/rackets headquarters, for instance, exemplifies the Poverty Row noir stylistics, perhaps borrowed from Detour: 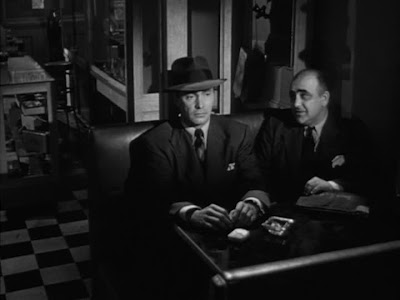 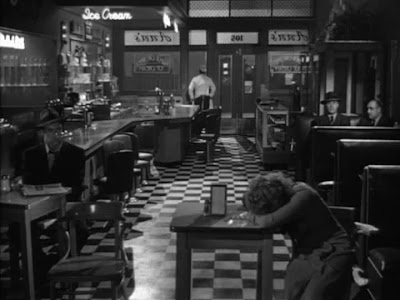 The language is borrowed from theater: spotlighting suggests a psychological interiority while the spatial separation of the characters at the end of the shot points out their isolation.
The set design, lighting and deep-focus cinematography create unusual, off-kilter compositions. 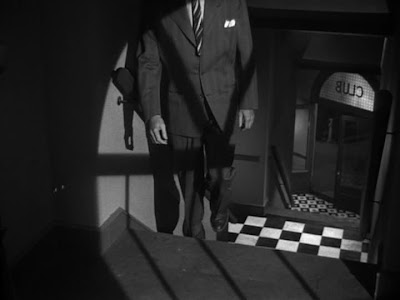 This is in addition to the B-movie production values of sound stage shooting and rear projection. 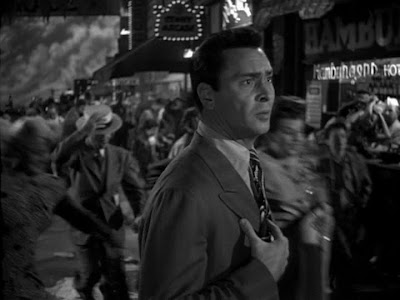 So the stylistics are typical of Poverty Row noir, and the characterization, too: the title character Shabunka (Barry Sullivan) is psychologically disturbed (even though his paranoia has some just cause) and there are existentialist undertones to his success drive. At the same time the narrative is an inverted American Dream trajectory, much like a classic gangster film. Even the femme fatale character (played here by the one-named Belita) is closer to the gangster-moll characterization than to, say, the vamp in Out of the Past.
Finally, on another note, I found myself intrigued by the painting in Shabunka's apartment. Done in some expressionist-meets-Goya style, it seems to comment on the character at key points, yet its message seems mysterious and oblique. People often read Ulmer's films as commenting on the clash between mass and traditional culture, but here too we have a purposive use of art within a B movie context. 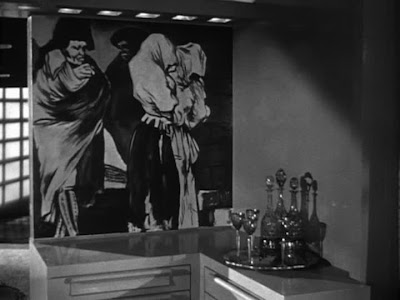 Anonymous said…
This film is a largely unknown classic, perfect except for the sermonised ending speech.

That opening monologue in which Shabunka justifies his exploitation of those he exploits via his petty rackets - 'broken down mutts', the salt of the earth citizens he despises. The skilfully crafted sequence when Shorty the soda jerk is closing up the ice cream parlour; the last jitney bus leaving, the lights being turned off, the characters sat wrapped in their own thoughts, haunted by dreams and fears. This exceeds in monochrome anything Edward Hopper set down on canvas.
Shabunka himself is a contradiction. Outwardly a strutting, wooden caricature of a gangster; inwardly the opposite, a pessimist whose intuition ruins any possibility of future happiness. 'You're no man of iron; you ain't no terrible big shot'. That sentence just about encapsulates Shabunka's character.
I have often wondered about the book 'Low Company', on which the film is based. Has anyone ever read it?
4:01 AM