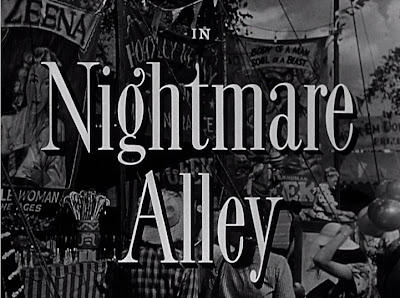 A film like Nightmare Alley (Edmund Goulding, Fox) makes me wish my literary history chops were a little more developed. For it seems to be part of a cycle of noir adapations of novels centered not on hard-boiled detectives but on ordinary protagonists (or anti-heroes) in contemporary settings. Along with writers like Cornell Woolrich and Kenneth Fearing, Nightmare Alley author William Lindsay Gresham is drawn to the allegorical. The plot is a rise-and-fall narrative about a carnival worker Stanton Carlisle (played by Tyrone Power in the film) who uses a special code to make it big as a mentalist in the big city. 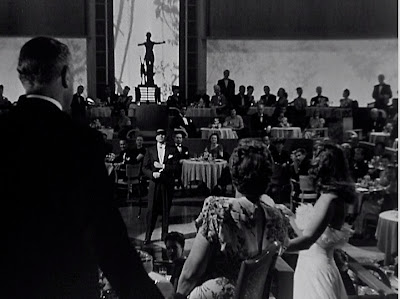 Not satisfied with the nightclub entertainment circuit, he decides to play con artist among New York's socialites. What's unusual about the narrative is the ambiguity around the paranormal (Stanton is clearly a con man, yet the fatalism ) but also the commentary the con game makes about class.

Though packages among the Fox Noir DVD series, the film is unusual for a 20th Century-Fox film. For its crime dramas, the studio tended toward the murder mystery or the police procedural. Nightmare Alley defies typical genre expectation and is notably downbeat; apparently (according to the DVD commentary at least) only the influence of Tyrone Power convinced Zanuck to support what was an A-budget for a film that seemed to be B material better suited for another studio.
Lee Garmes' cinematography exemplifies the stylistic hybridity of the film. The variety of lighting approaches and tonal schemes is astonishing. To take just one instance, one shot early on exhibits much of what one might characterize as a quintessential 40s noir look, hard-edged with ink blacks, staged in deep focus, undoubtedly shot with a fast film stock: 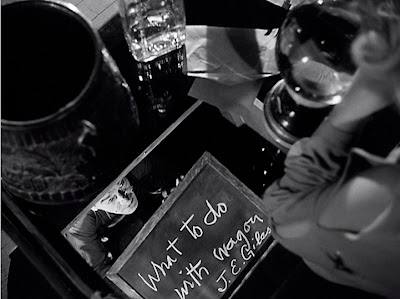 This is followed immediately by a shot that, while also recognizably 40s and also shot with fast film stock, conjured the shadowy romantic style of 30s cinematography, with one plane in focus and a gauzy softness in the background. 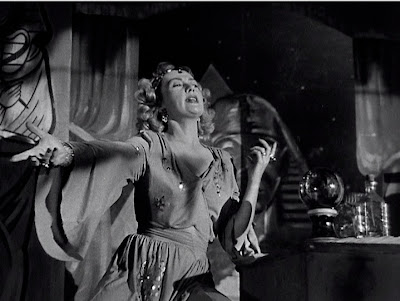 At times, too, there is what I would consider a distinctly Garmes shot, with different actors lit in different amounts of grayscale to set them out as distinct two-dimension planes  - something he would pursue more in The Paradine Case. 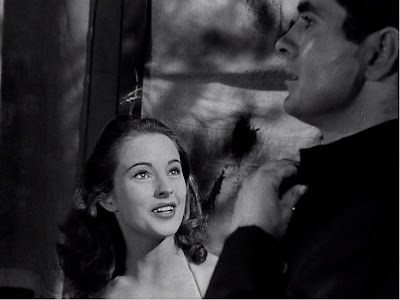 All of this goes to show, as James Naremore has argued, that what passes as "noir cinematography" is actually a wide range of practices. The variety is only confounded when a studio adapts material outside of its typical generic territory, or when it brings on an outside cinematographer, who adapts to the house style but not without showing his own distinctive style.
Labels: 1947 project adaptation film style house style