Out of the Past

Once again, we have credits over live action footage - a minority practice in 1947, but apparently gaining some favor. 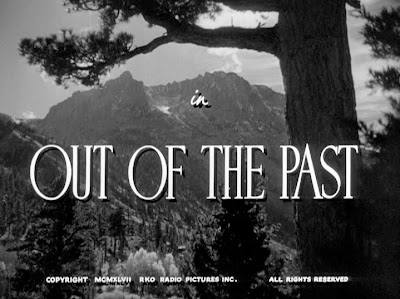 When I describe my 1947 project to people, I'm hard pressed to name many films likely to be familiar. 1947 was a remarkably unnotably year for the film canon. Out of the Past (Jacques Tourneur, RKO) is a major exception. As James Naremore notes, the film actually has a style quite distinctive: "Interestingly, Musuraca's work involves no night-for-night scenes, no distorting lenses, no extreme deep-focus compositions, no 'choker' close-ups, and very few radical angles - in other words, it manifests almost none of the traits that Place and Peterson claim are essential to the visual atmosphere of film noir." (More than Night 175).

His claim seems to be corroborated for the film's unusual abundance of fill. Hollywood style of the 30s might wash out facial features in selective moments, but here new and often unreal effects appear. 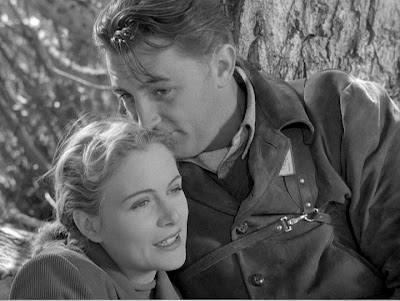 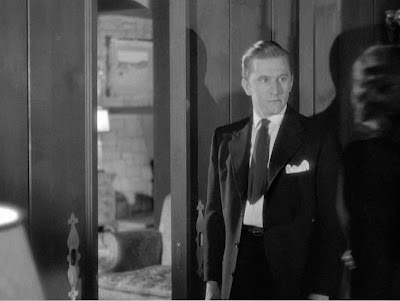 Mind you, in the first still, the lighting is premised on gender asymmetry. Yet it violates the portraiture conventions for achieving this symmetry (cf. Patrick Keating's "From The Portrait to the Close-Up" Cinema Journal).

And, yet, Naremore's choice of film seems likely because it ranks high in the noir canon: its flashack structure, its femme fatale, its corruption-under-the-surface-of-perfection theme, its Mexico-as-other motif, its romanticism. And some of its cinematography/lighting practices seem influential or at least indicative of trends to follow, namely, harsh low-lighting, innovative use of practicals, and low angles. 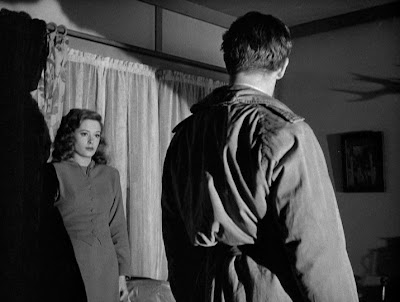 The opening of The Naked City, for instance, seems remarkably resonant of the discovery-of-the-body scene in Out of the Past.

Finally, Naremore writes that 1947 was the height of "noir" - "During that year, it was estimated that only 12 percent of U.S. films were photographed in color." Hopefully I will be able to do more than estimate! Moreover, the project has helped me contextualize noir - it's less significant to the film industry of the late 40s than the disproportionate amount of scholarship and criticism would suggest and yet Naremore's right: "noir" films seems to outnumber those of other genres. At least so far in my viewing.
Labels: 1947 project

I always thought Out of the Past had some of the best noir lighting. The traditional three-point lighting scheme is altered every time the story shifts into danger mode.