The Effort of Effortlessness

Phil Rosen has a theoretical reading of the detail in the Hollywood film – see also Tom Brown's recent Screen article – but for a basic sense of how much time, money, and energy the studios put into the detail, I love the accounts in the trade publications. This is what cinematographer Charles Rosher wrote about The Yearling:

To keep the Baxter farm in green crops, 27,000 stalks of corn and 4,200 tobacco plants were raised in cans and hothouses to replace those withered by the sun.... On Stages 15 and 30 of the MGM lot, the Baxter cabin and part of the farm... were recreated. To insure authenticity, the Florida cabin was dismantled and, together with rail fences, was shipped [from Florida] to Culver City. Forty tons of Spanish moss... was loaded in a refrigerated car to keep it alive...." (American Cinematographer May 47)

The final product of this labor? 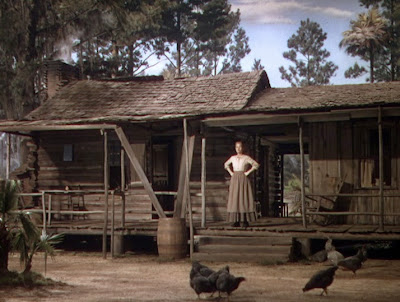 The amazing thing, mind you, is not that Hollywood would spend so much money then (they still spend lots of money), but that technological and production reasons made shipping a cabin and Spanish moss across the country so much more cost effective than location shooting.
Labels: production history