Well, I shouldn't be ascribing intention or lack thereof so casually. But I was struck by the following shot transition in Arrowsmith, a film made during a period when classicism was not typically stretched to stylistic excess (or so my understanding goes) - and directed by the "classicist auteur" John Ford. When Martin Arrowsmith's wife Leora implores him to forget his lab, he replies, "Don't worry, I have." Dissolves take us to testtubes in the lab, then back to the Arrowsmith home again: 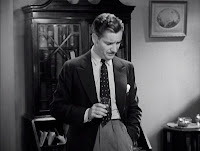 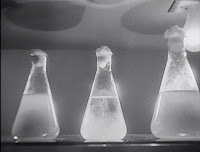 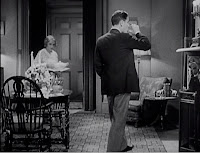 It may well be that the narration was perfectly readable at the time, but at least today - and based on what I've seen from classical Hollywood - the sequence is unusually ambiguous.

Most logically, the dissolves and sound mixing suggest a scene transition - that the next scene will be in the laboratory. But since the dissolve returns the film to the original scene, the dissolves come across as an insert that comments on the action - Arrowsmith in fact is thinking of the lab and the spectator visualizes his thoughts. So rather than an objective presentation of narrative information, we have a subjective shot. However, something is bubbling in that middle test tube and the development turns out to be significant when the Arrowsmiths walk over to the lab. 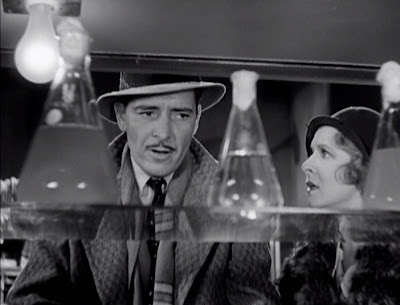 It's not the sequence fails to mean - the sheer forward narrative thrust and the otherwise clear communication of the filmmaking means the moment does not remain an unanswered enigma. Yet's it unclear to me exactly what the shots say about the subject matter.
Labels: classicism/post-classicism narration