Laura and the semiotics of the pocket square... 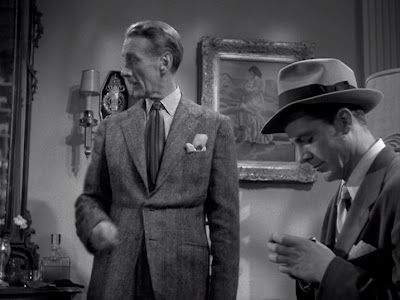 This is, in semiotic fashion, a binary and systematic opposition. Waldo is rumpled, rule-breaking, dandyish; MacPherson geometric, straight (in multiple senses of the word), petit bourgeois. The pocket square reinforces the broader distinction in costume between the two characters (compare their ties above, or the cut of their waist), and an even broader distinction in character. It's even a detail that gets some attention, as the narrative dwells on Waldo's dressing and frames the pocket square stuffing near frame center. Laura's also a film deliberate in its details to convey character visually and economically. My favorite examples it the handheld game MacPherson plays, above and below... Yet as much as it's part of the film's meaning system, the detail of the pocket square relies at least partially on a formalized culture of dress. Historically, American male dress has become much more informal. One can apprehend the meaning of the pocket square only a few ways: a) belonging to an increasingly rarified social circle/occupation where these details are ritually observed; b) learning the knowledge in hobbyistic fashion; or c) deducing from other films or cultural representations what dress codes were at the time. In any case, what's missing is d) a widespread everyday, intuited meaning of what formalized dress means. One need only read Erving Goffman's Presentation of Self in Everyday Life to realize that while the general principles of social interaction may be the same today, we now lack much of the everyday knowledge that once was taken for granted. (Presumably we may have learned other things in the process.) Some readings have to reconstitute this knowledge; in any case, it becomes a challenge for teaching older films.

Or, in other terms, it occurs to me that to read classic Hollywood is to grapple with connotations lodged somewhere between Roland Barthes' semic and cultural codes. Which, after all, is Waldo's pocket square?
Labels: film style hermeneutics