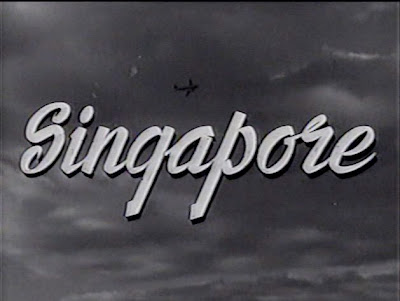 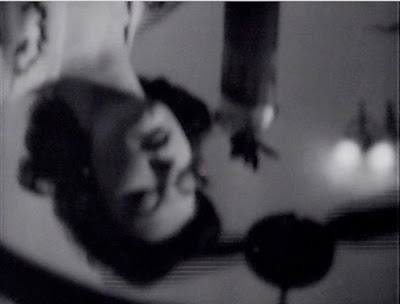 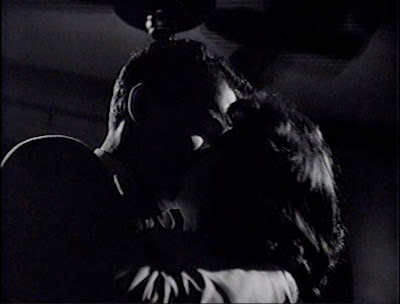 Christine Gledhill argues that in noir "the heroine's characterization is itself fractured so that it is not evident to the audience whether she fulfills the [femme-fatale] stereotype or not" ("Klute" 18). Singapore fractures the characterization to extremes: Linda Grahame (Ava Gardner) suffers from amnesia and therefore is two different characters in the film. However, this unknowability of character mostly runs parallel to Matt Gordon's (Fred MacMurray) dual search - for a lost love and for stashed pearls. This disconnect means that Singapore is not likely to come across as an ideal-type noir.

There's plenty to say about the larger ideological formations of the narrative, which is both an orientalist view of Pax Americana in the Far East after World War II, and a figuration of the British-American relationship. But it's two shot sequences I'd like to consider in detail.
First, in the opening scene, Mr. Bellows (Porter Hall) looks out the plane window, then a cut shows a documentary-like aerial shot of "Singapore, pearl of the east." (The character's words act as voiceover.) The next shot shoes Bellows unconcerned with the outside. In effect, this shot exchange uses the character POV as a pretense for an "objective" view of the "East".  Spectatorship theory tends to privilege the POV shot as suturing the perspective of the viewer into the film's, but if anything the fake POV does a better job at making the "documentary"/ orientalist view the spectator's. It's not just that Bellows is looking then is not looking; it is that the film edits over this change in perspective as if it were not one. 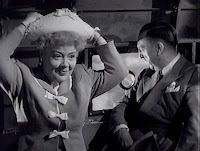 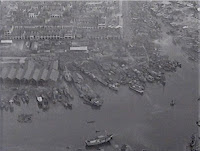 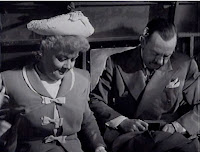 A second scene is also remarkable for an asymmetry in editing relations. In this instance, a conversational exchange between Gordon and the Bellows as they prepare to leave Singapore, shots 1 and 3 have the same setup and looking relations, the internal gaze cueing the inserted reaction shot of shot 2. Shot 2 holds narratively important information: the spectator learns for the first time that Matt is also leaving Singapore and, given the closer frontal shot, can read through his facial expression that he's emotionally torn about doing so. The choice to cut exemplifies classical Hollywood's narrational economy and cutting style (we cut in only to learn and experience something), and the scene economically communicates the complex dynamic of the exchange (some inner dilemma is going on beneath Matt's cool exterior, and the Gordons are oblivious to it). 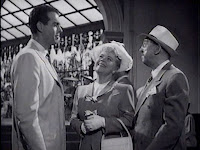 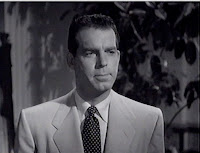 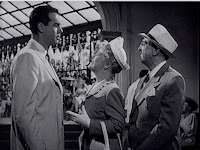 It is interesting, and perhaps typical, that the film could not imagine a reverse field or symmetrical shot of the Gordons' expression. Clearly in classical Hollywood, parity of reverse field was common, but the short running time and narrative concision require the Gordons to be supporting characters without true perspective and psychology. The initial decisions get made by the scriptwriter, but they play out in the continuity choices. To my best guest, Singapore probably circulated as a programmer, with a shorter (80m) length that could justify an A or B feature. It certainly had higher production values than many Universal films, but lacked the gloss, care or script that Double Indemnity, Gilda or Out of the Past had.
Labels: 1947 project classicism/post-classicism narration orientalism