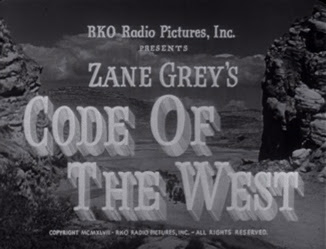 If anything shows the factory approach to B movies, the series of Westerns that RKO put out during 1947 do. All tout Zane Grey source material, and most star Tim Holt as the upstanding small businessman on the frontier. In each, Richard Martin, plays Chito, a Mexican-Irish simpleton with a good heart and healthy libido. By the film's end, Holt's character (different name each time) has a chaste friendship-romance with a damsel in distress, while Chito has settled down with the saucy woman he's been chasing for the film.

The films are intriguing for their partial conformity to what is now considered the tenets of the Western genre. In Rick Altman's terms, they have Western semantics, but not Western syntax. Its iconography fits comfortably, in its focus on landscape, in the reliance on guns and dusty town jails, even in the trusty low angle compositions of horse and frontiersman against sky: 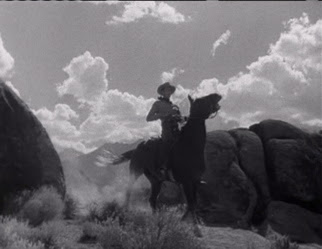 However, the narratives draw more from the (urban) Victorian melodrama, with its populist pitting of the small man against malign and corrupt trust. Though violence is crucial to the restoration of the forces of good, this is more likely to take the form of a chase and fist fight as a shootout. And the Tim Holt is squarely the good character, with no hint of outlaw hero status. Roberrt Warshow mythology does not apply here.

There are some moments of formally interesting composition, such as this use of deep space from Thunder Mountain 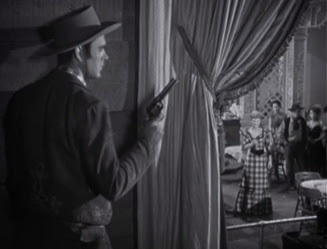 but in general these hourlong Bs feel like Bs, with basic setups and a frontal, centered quality that would later be exploited by television.
Labels: 1947 project