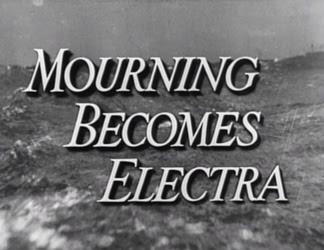 If there's any film to drive the auteurists and the medium-specificity polemicists into paroxysms, it's Dudley Nichols adaptation of Mourning Becomes Electra (Dudley Nichols, in-house production at RKO). Resolutely faithful adaptation, its running time eventually trimmed by a nervous studio - the DVD version circulating today is a healthy 160m, just 15 min shy of the original. The narration is dialogued based, with almost no attempt to find cinematic and visual equivalents of spoken exposition. Its staging maintains the unity of time and place of the stage set and makes almost no concession to an autonomous, illusionistic story space.

The blocking of action itself reminds me more of Ordet than Classic Hollywood, with actors both in frontal stances... 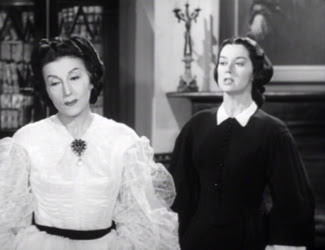 or with backs to the camera.... 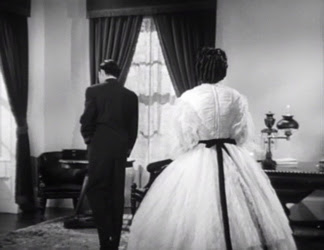 Judgments of "talkiness" don't capture the extent to which cinematic narration is organized differently in this film. It's not as if cinematic decisions, like an occasional use of deep focus, don't enter the aesthetic equation: 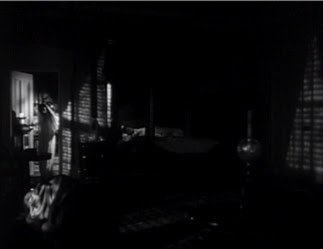 I highlight the issues of cinematic adaptation not to set up an evaluative judgment - personally I found the cine-staging of the play gripping enough - but to recognize that there was something distinctive, radically new, in this new type adaptation. In my Screen article on the prestife film, I highlight how the classical adaptation prominent in the 1930s used source material in mostly superficial ways, at the very least as raw material that cinema would manipulate to drastically different aesthetic ends. Too, in the 1940s, this approach continued: witness William Wyler's adaptation of Washington Square, The Heiress, in which the original Jamesian aesthetic is mostly missing. But here, Nichols takes the aesthetic mission of experiential subtitution (watching the film as an experience of the play) seriously. It's a curiously staunch highbrow voice in a cinema that previously had not spoken very much to highbrow sensibility. The aesthetic castigations of its project can blind us to the extent that, much like Lady in the Lake, its purported failed experiment has a lot to say to us about cinema and its changing form in the postwar years.
Labels: 1947 project adaptation prestige film