Let me step out of 1947 (but not far!) with another example of classsical self-reflexivity that I think illustrates some of the limits of popular-genre reflexivity about the movies, at least in the 1940s.

On an Island With You (MGM, Richard Thorpe, 1948) begins with an Esther Williams swimming sequence before her character comes to shore and a kisses Naval officer (Ricardo Montalban). Another woman comes along and the two women start a jealous fight: 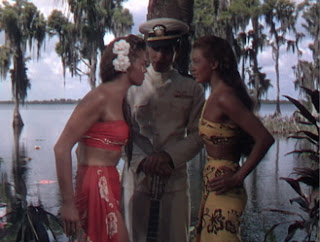 The scenes seems like a typical scenario of Hollywood's orientalism and gender politics (think of Vidor's Bird of Paradise), only soon Williams character "forgets her lines" and faces forward. The film then gives the missing reverse field: 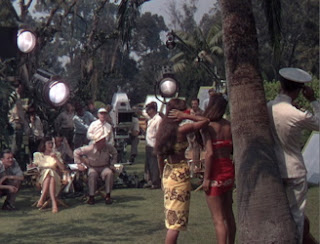 The island spectacle ridiculousness isn't real, you see, but only a film shoot.

I don't want to underplay the importance of this self-reflexivity as a phenomenon - as I suggested in Down to Earth, even popular genre films in the late 40s took it upon themselves to comment implicitly on Hollywood's position in a class hierarchy. It may even be possible, as Tag Gallagher has warned Western historians, that self-reflexivity was there all along.

Yet, it's also important to recognize how this reflexivity gets continually contained. Just a few minutes after the rupture of diegetic absorption, the replaying of the screen kiss - this time as "real" with Peter Lawford substituted in for Montalban - entails a full diegetic absorption of the spectator in a tightly shot, fully sutured screen space: 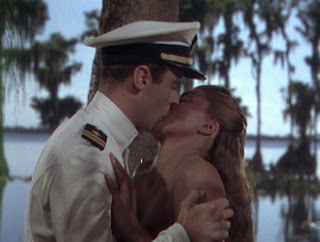 This switch from long/medium shot to close up is pretty much the same means that a film like Stage Door (to cite a non-reflexive example from the 1930s) uses to signal Katharine Hepburn's "bad" acting from her "real" self in her stage performances. And needless to say, neither film is in the least self-reflexive about the formal means for achieving that effect.
Labels: self-reflexivity