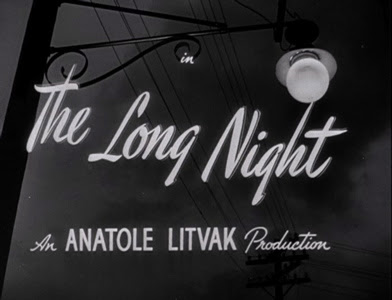 The Long Night (RKO, Anatole Litvak) was a noir remake of Le Jour se Leve, this time featuring the recurring type of the troubled World War II vet (c.f. Boomerang!) as the main character and romantic loser. After a dark enough credit sequence, begins in the pseudodocumentary fashion that we have already seen plenty in the 47/postwar films. The film goes further than others, even, in the extent of its documentary imagery and narration, which could just as easily be taken from The City: 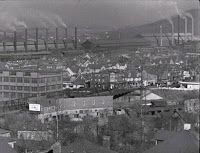 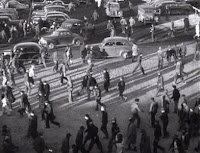 What's interesting, too, is that the class divisions that get taken up by the noir/poetic realist romanticism later in the film are laid out in documentary fashion in the beginning, as a contrast between the bourgeois residential neighborhood and the working class district: 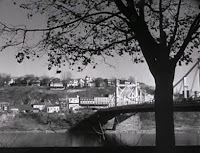 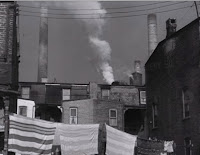 After this intro, the booming voice of God gets replaced by Joe's (Henry Fonda) own voiceover narration, and subsequent flashback, in the middle of which is nested Joann's (Barbara Bel Geddes) voiceovered flashback. The film, that is, provides many of the generic pleasures we now associate with film noir. No film has all of those conventions (here, the enigma of detection is missing), but The Long Night is as accomplished in its style as I've ever seen from Anatole Litvak, with some remarkable cinematography, both deep space... 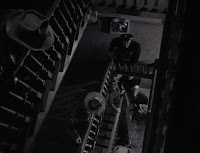 ... and fluid in camera mobility, as in the expressive tracks in on Joe. 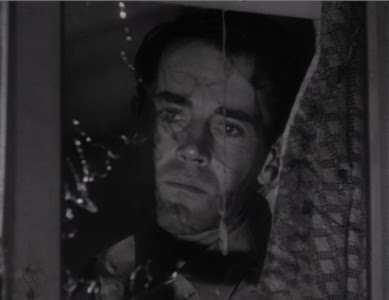 I don't know that before this film I was aware of the dual nature of Henry Fonda's star image. I'd mostly been aware of the Midwestern uprightness and "common man" image he'd parlayed in Young Mr. Lincoln and Grapes of Wrath. That's on full display here, but so is an intense
sorrow and psychological torment. (The Fugitive, I realize, was not an anomaly.) Thematically, the film comments on this split personality, with Joann/Bel Geddes' line about Fonda's face being both sad and happy, and a torn teddy bear standing in for the doomed man. Maybe the split was already there. In any case, Bel Geddes is played with and against type, as a Caught heroine who serves as a femme fatale of sorts.
Labels: 1947 project fake documentary star image