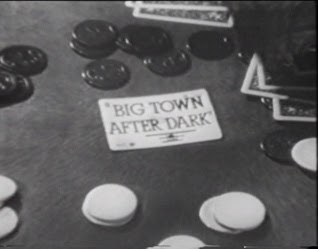 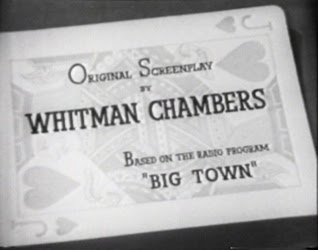 I was talking with someone over in Temple's intellectual history department who, because of his own dual interest in classical Hollywood and radio drama, was lamenting to me that film studies hasn't fully considered the impact of radio on the screen or the interrelation between the two. Not knowing anything about radio's history or aesthetics, I couldn't do anything but plead guilty, but the Big Town films of the 40s might provide fodder for his argument that the media were in fact related. 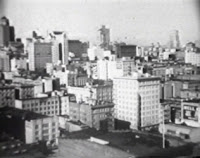 ... but quickly, the style of the film loses any of the distinctive markers of postwar cinematic vocabulary to take on quickie aesthetic of the B film. Hence the minimal mise-en-scene and extremely centered, static composition of the many interior scenes: 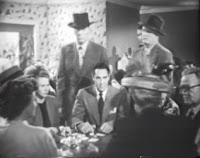 Big Town After Dark is often categorized as a noir, but not only does it not exhibit any of the off-kilter style that many to take characterize noir, it presents none of the exaggerated narrative enigma that noir inherited from the hardboiled novel. Big Town draws on the frisson of the cultural voyeurism that would be later taken up by the Confidential series of books, yet its moral universe is distinctly Manichaean. Perhaps this is an especial inheritance from radio serials.
Labels: 1947 project

shahn said…
otr and clasic hollywood films are my twin obsessions, so i tried to delve into radio shows that were translated into movies.

of the few i could find on dvd, i watched the "inner sanctum" b-movie series. unfortunately the lon chaney jr. films were too "hammy", not at all the quality execution of the radio programs.

i stopped there but if you find any good transfers please post them (or encourage you friend to!)
7:41 AM