Since I resolved to bring in more discussion of actual films, let me start with an issue that's basic and hardly an original observation, yet one which seems to me to illustrate the methodological distance between industrial and ideological-textual scholarship. I'm refering to the circulation of house styles among the studios. Whereas textual critics have a tendency to read the style of a given film as idiosyncratic or auteurist, historians often locate these in particular moments (as David Bordwell does) or in particular studios' preferences. My own work on the social problem film is assessing just how 20th Century Fox took on a particular brand of realism in the postwar years.

But for now I'd like to look at an earlier example from Warner Brothers. It's widely remarked how the studio carved out a niche for "social consciousness" films in the 1930s, often with explicitly Rooseveltian politics and a starker visual style. Even its prestige products like Life of Emile Zola wedded the liberal-left politics of the social problem dramas with the production values and thematic seriousness of the historical and biographical films. One scene in Zola, for instance, replays Germinal as a scene from Black Fury. What's remarkable in this upgrade is how high-key the lighting style is for much of the film. The opening shot, in Zola and Gaugin's studio, and the scene in Nana's apartment both show a scenographic space that's remarkably well-lit: 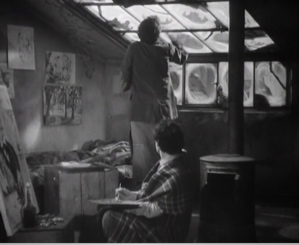 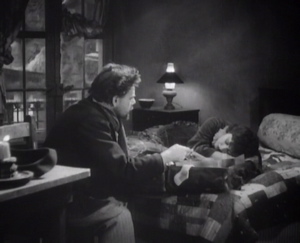 Here, the bohemian or subproletarian milieu are meant to be marked by set design more than cinematography. (It would be an interesting point of comparison to contrast this with the opening tenement in Christ in Concrete/Give us This Day.) The one exception to this high-key cinematography comes with Zola's first revelation of social injustice. He comes across the homeless sleeping along the river: 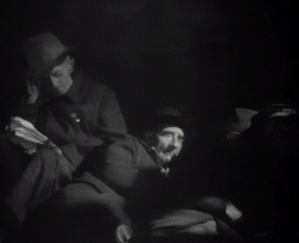 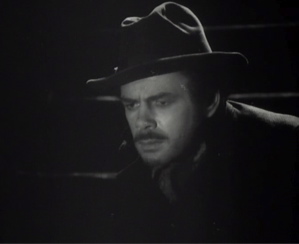 Here, the camera gains the spontaneous mobility it showed in Wild Boys of the Road, and the sparse visual register of the early 30s Warners features. Even the fadeout on Paul Muni recalls the last shot of I Am a Fugitive. On one hand, the idiosyncratic qualities of the text allow us to read this use of a studio house style in a specific way: the revelation gains more dramatic weight to this revelation and signals the "realness" of the poor's suffering. On the other hand, the subtext is one of studio self-referentiality. Zola represent Warners' (successful) attempt to make it on the terms of quality that other studios would recognize, and in doing so, it created a narrative linking their lower-budget productions to the prestige productions of the biopics. Zola, in fact, is a transparent stand-in for Warners crusading image and self-image.

I happen to think more work needs to be done on prestige films, to understand studios' specific interests in showing themselves for a community of makers as well as for a public of consumers.