What Film History Textbooks Can Do 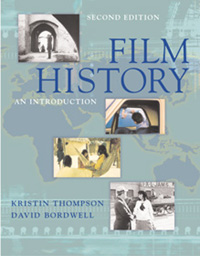 Given my disastifactions with Bordwell and Thompson's Film Art that have particularly come to the fore teaching Intro this semester (more on that later), I should take the time to say I really, really like Kristin Thompson and David Bordwell's Film History: An Introduction, now in its second edition.

"An Introduction" might be a little misleading... the writing is hardly too jargony for beginning students, but they may find difficulty with the sheer scope and detail-laden nature of the tome. Also, the stylistic history does presume some familiarity with formal terms of film analysis. So I think it may be better pitched for intermediate or advanced students, those taking a Film History survey in a sequence, for instance.

But for those students - even for scholars participating in the field - Thompson and Bordwell's historical survey is incredibly useful. The book is almost an experiment, taking to heart longstanding calls not to write film history surveys according to narrow conceptions of the Western canon but to look to cinema as it actually was produced in its broadest sense. To that end, Thompson and Bordwell's history offers three major improvements. First, it takes popular cinema seriously, not on in the U.S. but in Europe, where national cinema scholarship tended for so long to focus on "significant" works. (To name names, I think Peter Bondanella's Italian Cinema is a prime example of this approach). Second, it devotes appreciable discussion time to non-Western cinemas. Not being a specialist in the scholarship on Third World cinema - or even the First World Japan - I can't weigh how adequate their coverage is, but the serious attention to Latin American, African and Asian cinemas - popular, art-house, and oppositional - is refreshing. Third, the book summarizes the scholarship as it currently stands on about every topic it covers - an incredible feat given the vast territory they're covering.

The result is that I initially assigned this book for my graduate seminar as background material to give a historical survey, yet I've ended up learning a lot from it and find my intellectual curiosity piqued at every turn.

As with any book there are drawbacks. The textbook format means there's less consideration of film history as the terrain of conflicting interpretations and explanations of the past - something that comes across better in Robert Allen and Douglas Gomery's Film History: Theory and Practice. Then again, Allen and Gomery don't present a fraction of the historical scope in surveying cinema of the past (and incidentally probably aren't worth the whopping $71 price tag).

Also, I know some find Bordwell and Thompson's writing style dry and unengaging. This book probably won't win any converts on that score. Still, it's a solid, comprehensive approach to the totality of cinema history.
Labels: film history textbooks