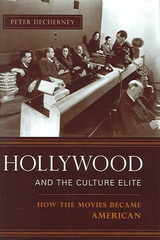 I've not completely finished Peter Decherney's Hollywood and the Culture Elite (Columbia UP, 2005) yet, but I've been enjoying and admiring it enough to recommend it to those who are interested in a detailed social history of the movies or in a closer look at film's role in American Culture.

Hollywood and the Culture Elite studies key moments in the interwar years during which high culture institutions - universities, museums, and government arts funding bodies - pushed to consider Hollywood film as an art. Vachel Lindsay and Columbia University; Harry Alan Potamkin and Harvard; Barry and MoMA - each encapsulates a struggle over cultural prestige that also, in Decherney's argument, figured and reworked the aims of both studios' economic aims and Washington's aims of political legitimation. What I find perhaps most impressive is the book's exploration of broad-scale social relations - a three-way negotiation between the cultural elite, the power elite, and an economic elite (Hollywood) - in a very detailed history of specific institutions and moments. The argument is one of the better iterations of the new turn to empirically-oriented social history in film studies today. (Haidee Wasson's Museum Movies is a logical companion book to this, and one I hope to write something on here soon.) Even those turned off by empirical, traditional historicism might still find the counterintuitive force of Decherney's understanding of the postwar avant-garde, say, worth reading.

What I could have used a little more of was a laying out of Decherney's theoretical approaches and assumptions. He does seem to be laying out some version of the multiple-power-elite model of sociologists: Why this model? Is it suggested by the object of study? How might competing models fail to explain the empirical detail Decherney is unearthing and synthesizing? I myself tend to resist the instrumentalist model of power that seems in play here; social agents in this book (from what I've seen so far) tend to be quite purposive in their cultural stances and weilding of power. In contrast, one of the reason's I'm drawn so to Bourdieu's work as a social theory to underpin film historical research is that he offers a "left" understanding of the social world that traces the forces acting on power-weilders as much as on the powerless. Rather than institutions, the social field is the unit of analysis. For his part Decherney mobilizes his evidence for power-elite institutional operation quite credibly. I'm now left to mull over its implications.
Labels: book reviews cultural history

Anonymous said…
Hello Chris, what an excellent analysis of the current texts in the field. Just a helpful note - Routledge do very much comp textbooks, do contact the editor for film and media, or his assistant to rush a copy to you. I'm the former VP of Routledge and we relied very heavily on feedback and support from academics like yourself to produce great texts for the market.
7:45 PM