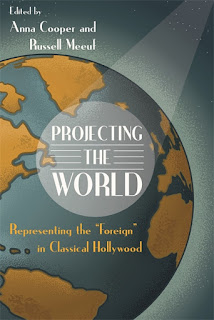 I'm pleased to note that I have an essay in the newly published volume, Projecting the World: Representing the "Foreign" in Classical Hollywood, now out from Wayne State University Press. Thanks to editors Anna Cooper and Russell Meeuf for including me and for their editorial guidance as I revised what was initially an outcast from my book into a stand-alone article. And I'm eager to read the other essays in the book, all exploring the still underexamined transnational dimensions of Hollywood in the studio years.

My essay reads Kramer's On the Beach and Preminger's Bonjour Tristesse as comparable cosmopolitan texts offering a "Europeanized" spin on prestige film aesthetics.

My project initially started as I came across pressbooks in my research of Stanley Kramer. I'd initially looked at Kramer's work as a social problem film auteur, and On the Beach fit that mold, in part, but it also seemed to foreground an international cosmopolitanism in its marketing. 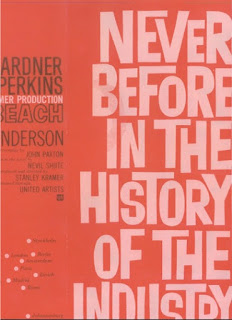 This cosmopolitanism doubled the film's theme (an adaptation of an Australian novel, shot in Australia, about the geopolitical fall out of a nuclear war) and the film's own production history, showing the impact of runaway production and transnational labor.

And, perhaps, most of all the cinematography, headed by DP Guiseppe Rotunno. In his book on classical Hollywood lighting, Patrick Keating makes the useful distinction between classicist cinematographers and mannerists. Rotunno was neither but rather a heterodox DP importing the modernist sensibility of Italian art cinema. He has some striking lighting setups in the film, and other instances of playing with shadow. But just as striking for me is the way he could transform a figure lighting setup into something offbeat, but beautiful. 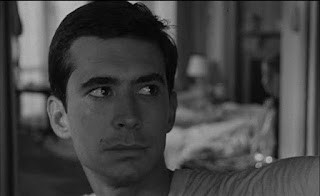 Admittedly, Bonjour Tristesse was an add-on but one that made sense the more I explored the odd fit between Preminger's runaway productions and his reputation as a classical Hollywood auteur.