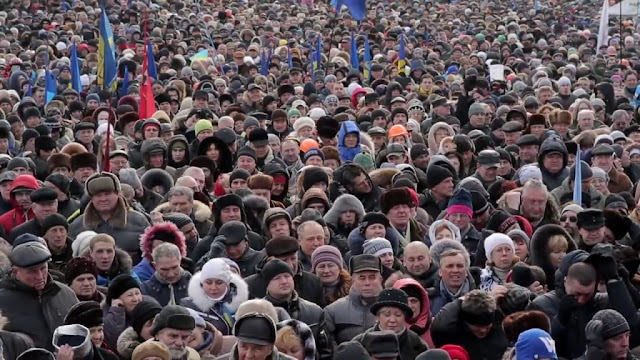 Maidan
dir. Sergei Loznitsa, 2014
Genre: experimental/observational
on home video from Cinema Guild, via VOD, and on Netflix (US)

I have been reflecting a lot of just what I am trying to do with documentary criticism, both in my research project and on this blog. I am not a documentary critic and am not trying to be one, strictly speaking. I write as a scholar, with a scholar's perspective. At the same time, film studies has reenergized by a dialogue with film criticism, and it's something I've been mulling over. And most of all, the documentaries themselves are driving my interest, and I want to grapple seriously with what they do, and that's a process that's not too different than film criticism.

I still don't have a full answer, but I think one difference is that I have a different relationship to the evaluative than film critics do. I have judgments and they inform what I do, but I am trying not to be invested in what I see as sometimes narrow polemics of what documentary should do. As I wrote in an earlier post, I seek to walk the line between omnivorism (loving all documentaries for the sake of their nonfiction-ness) and discernment (loving only a narrow and particular kind of nonfiction practice). To be honest, I see this as not too different than some of the discussions that goes on in TV studies, between those invested in a historically far-reaching TV canon and those champion contemporary long-form prestige TV.

I had this in mind watching Maidan, the poetic-observational portrait of the Euromaidan, a series of protests and police action in Independence Square, Kiev. Loznitsa works in a range of styles but the hallmark perhaps has been the importation of certain experimental techniques (for instance structural filmmaking) into documentary. Maidan works in this structural vein, featuring a series of long-takes that have the immediacy of capturing the protests but are clinically detached from them.

The film was a fairly big festival and critical hit, so at first glance it doesn't need any defenders. But it is a difficult film, in large part because of the gap between the current events hook (Maidan gives a close-up look missed by many journalists) and the minimal, even evasive narration. The film consists mostly of static, (very) long takes. Beyond some basic intertitles, the film gives the spectator no indication of any particular political meaning of the shots.

Of course it's the minimalism that endears it to critics. After all, a less minimal approach can pose easy answers to to complex political problems. But it also poses problems. If there is an opportunity to illuminate the events of Euromaidan, not simply phenomenologically but politically, historically, and analytically, Maidan's structural approach does not allow it. The disadvantage of poetic and experimental documentary can be its refusal to analyze.

So I can imagine two sides of a polemical debate, or really two documentary taste formations. My impulse is to value both formations without taking sides. Though to do so without losing the sense of critical perspective on the film or on doc aesthetics. 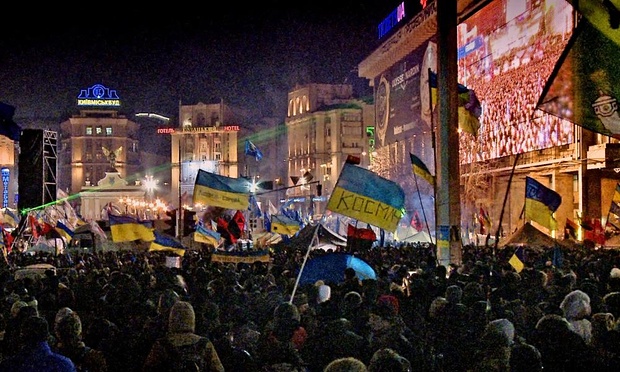